In the nearly two years since the 2016 election, pop culture has been awash with efforts to explain Donald Trump, as well as post-mortems and soul-searching that examine how he became president.

With all of that, on top of each day’s dizzying news cycles, Michael Moore recognizes that there’s “Trump fatigue.” But the “Bowling for Columbine” and “Fahrenheit 9/11” filmmaker thinks his latest documentary, “Fahrenheit 11/9,” can cut through the noise and take the long view on Trump’s presidency.

“One way to bring Trump down is don’t make a movie where you have to look at Trump for two hours,” he told HuffPost at the film’s Washington premiere on Monday. “So people who come to this movie: You’re not going to have to deal with that.” 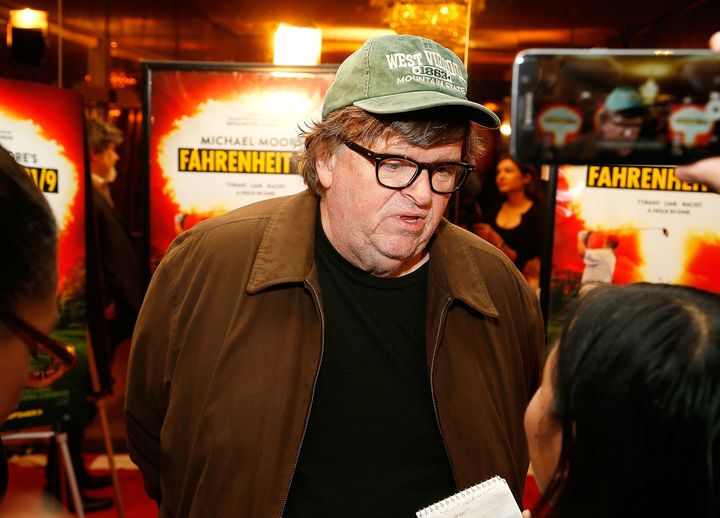 While “Fahrenheit 11/9” starts with retracing the final days of the 2016 election, as well as Trump’s history, the president eventually does fade into the background. Moore turns his lens toward the systems and institutions that catalyzed and enabled Trump’s political rise — trying to answer the question, “How the fuck did this happen?” as he says in the film.

With his usual righteous fury, Moore leaves no stone unturned in his criticism of the broader system, taking aim at a range of culprits that include the mainstream media, the Democratic Party and former President Barack Obama.

The documentary’s many strands, formed through Moore’s signature pastiche of interviews, fly-on-the-wall moments, archival footage and snarky gimmicks, feel fragmented and don’t quite come together at times. But ahead of the Nov. 6 midterm elections, it intends to be a call to arms for Democrats to motivate voters of many stripes.

Moore was adamant in his comments at the premiere that Democrats need to stop trying to appease or appeal to Trump voters; instead, he said, they need to energize voters on their side who may have sat out the 2016 election and have felt disenfranchised for years.

When asked if Trump voters might take away something from his documentary, he said: “Yes, but not most of them. Look, let’s be honest: If you, after these almost two years, are still for Trump after everything you’ve seen, all I can do is, like, you know, wish you well.”

“There’s kind of a lost cause there, and I encourage liberals and Democrats not to waste a lot of time expending the energy on trying to convince a Trump voter,” he said. “We don’t need them. We’re the majority. We won (the popular vote) by three million… but because we’re liberal arts majors, we’re not good at math or geography, and we didn’t figure out the Electoral College, and blah blah blah, and that’s why we’re here. So let’s get our big brain going, and let’s do what we can do in November.”

The main problem, in Moore’s view, is the Democratic strategy of trying “to not rock the boat — in other words, to lose,” as he says in the film. He skewers Democrats for playing nice, featuring a montage of lawmakers saying the word “compromise.”

“If you leave this up to the Democratic Party apparatus, we will fail,” he said during a lively Q&A after the film. “You have to admire Republicans and the right wing on some level because they have the courage of their convictions, and they will not relent. They will stand up and fight for what they believe, even after they’ve been proven wrong by the facts. They just will not give up.”

Though the film does try to turn away from Trump and focus more on systemic and institutional problems, the president is never far from view. Moore’s refrain throughout the film and in his Monday comments: “Donald Trump did not just fall from the sky.”

He points out in the film, for instance, how Trump’s long history of racism — from getting sued for housing discrimination, to calling for the execution of the falsely accused Central Park Five (five teenagers of color falsely accused in the rape of a jogger in New York), to propping up the birther movement — “isn’t anything new.”

“Fahrenheit 11/9” is filled with portent, arguing that without citizen action, what Moore sees as Trump’s progression into despotism — illustrated by his embrace of strongman techniques like undermining the free press, trying to silence critics and casting doubt on democratic institutions — will worsen.

“The strongman only succeeds when enough people have decided they’ve seen enough and give up,” Moore says in the film.

He turns to his hometown of Flint, Michigan, as a case study, arguing that Gov. Rick Snyder (R), like Trump a businessman turned politician, was a precursor to the president. At several points, the film returns to Flint to drive home how systemic failures like the city’s water pollution crisis ― and the failure of politicians, including Obama, to adequately deal with it ― can intensify voter apathy.

The film is not without glimmers of hope. It tracks the grassroots momentum of progressive candidates such as New York congressional candidate Alexandria Ocasio-Cortez, the educators in West Virginia who started a wave of teacher strikes across the country, and the teenage activists of Parkland, Florida, who allowed Moore to chronicle them as they organized the massive March for Our Lives demonstrations earlier this year.

For Moore, these movements provide roadmaps for the path forward.

“Trump only exists because we allowed him to exist,” he told the audience after Monday’s screening. “We are all complicit in this, and we all have to share some of that responsibility, and we are all required to act in the next 50 days.”

Singapore GE2020: What to do on Polling Day

The Trump administration is backing down from its war with Dr. Fauci after it became obvious it was backfiring
Industies News