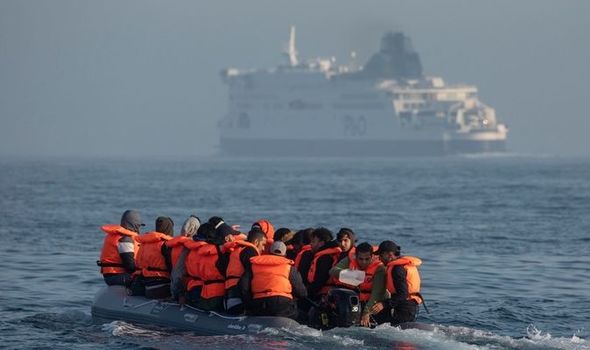 Sir Edward Leigh told Home Secretary Priti Patel that the Government had “lost control” in the crisis. Anger erupted at Westminster yesterday after figures showed more than 25,600 people have made the journey across the Channel this year.

Small boat arrivals in 2021 now stand at more than triple the figure for the whole of last year, when 8,417 people crossed.

At least 886 people succeeded in reaching the UK on Saturday alone, the Home Office said.

Ms Patel, who is under intensifying pressure over the migrant crisis, faced an urgent question from Labour in the Commons yesterday.

She was also heavily criticised by the shadow home secretary Nick Thomas-Symonds, who accused her of “empty rhetoric and broken promises”.

But she also had to endure criticism from her own side.

Sir Edward told her: “We told the people at the referendum, us Brexiteers, that we would take back control.

“It’s clear that in this we have lost control. If you tell the most desperate economic migrants in the world that we will provide a free border service, taxi service across the Channel, we will never deport you, will put you up in a hotel as long as you like, is it any wonder that more and more come?

“This is now a national emergency. Will the Home Secretary bring in an emergency powers act to override the Human Rights Act if necessary and put these people in secure accommodation now, otherwise we won’t solve the problem.”

Lee Anderson, another Tory MP, said: “Seeing thousands and thousands of illegal immigrants coming across the Channel is not the points-based immigration system I thought we were going to adopt when we got to this place.”

He urged the Home Secretary to control immigration through off-shore processing of ­asylum applications.

He said: “Millions of people who voted to leave the European Union, they did so to take back control of our borders, no ifs no buts, and on our own terms and not only if the French agree.

“Therefore, does the minister agree with me that in the spirit of taking back control, we need to intensify our movement towards off-shore processing, which we know was successful in Australia?”

Ms Patel told MPs: “This problem will take time to fix and there is no silver bullet. The only solution is wholescale reform of our asylum system.”

Defending the Government’s approach, she said “a range of negotiations” with EU figures were taking place over the issue. She added: “They are having discussions with us out of their own frustration around illegal migration. They are topics that are very much concerning all ­governments right now.”