New White House immigration rule: How will your taxes be impacted?

FBN’s Edward Lawrence on a new rule that would deny green cards to illegal immigrants likely to rely on government aid.

A new White House rule that requires foreigners seeking to enter the U.S. disclose their use of public benefits would save taxpayers about $2.27 billion per year, according to the Department of Homeland Security.

The final rule, which was announced Monday and goes into effect Oct. 15, would cost applicants somewhere between $45 million and $130 million per year, when considering time spent on paperwork, lost wages and legal fees.

The Trump administration wants to know how likely an immigrant is to become a "public charge," someone who receives government benefits like food stamps, Section 8 housing assistance and some forms of Medicaid. Being a public charge would make it less likely for U.S. officials to approve applications for entrance to the U.S. or for a green card.

DHS estimated that the rule would affect 382,000 non-citizens, meaning it would cost $117 per person.

"Through the public charge rule, President Trump's administration is re-enforcing the ideal of self-sufficiency and personal responsibility, ensuring that immigrants are able to support themselves and become successful in America," acting U.S. Citizenship and Immigration Services director Ken Cuccinelli said at the White House Monday.

“This news is a cruel new step toward weaponizing programs that are intended to help people by making them, instead, a means of separating families and sending immigrants and communities of color one message: you are not welcome here,” NILC executive director Marielena Hincapie said in a statement Monday. 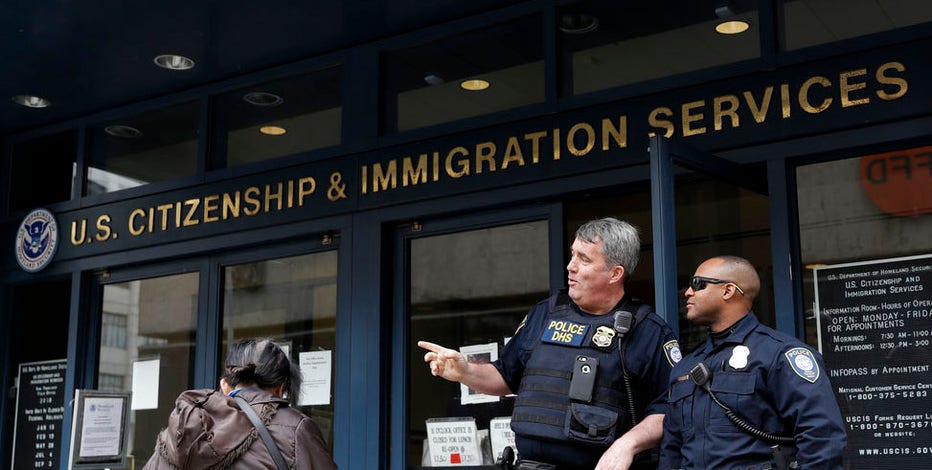 File – In this Feb. 28, 2018 file photo, the entrance to the Immigration and Customs Enforcement office is guarded in San Francisco. Federal immigration agents arrested 115 people during a three-day operation in the San Diego area amid heightened ten (AP)

The DHS estimate was far lower than an analysis by Boundless Immigration, a tech company that shepherds immigration through the U.S. immigration system. Boundless estimated that the paperwork costs of the rule could go as high as $13 billion.

The Center for Immigration Studies, which favors lower levels of immigration, found in 2015 that the average household headed by an immigrant costs $6,234 per year in taxpayer-funded benefits.

U.S. Citizenship and Immigration Services first proposed the rule in September 2018, and it received a whopping 266,000 comments on the proposal.