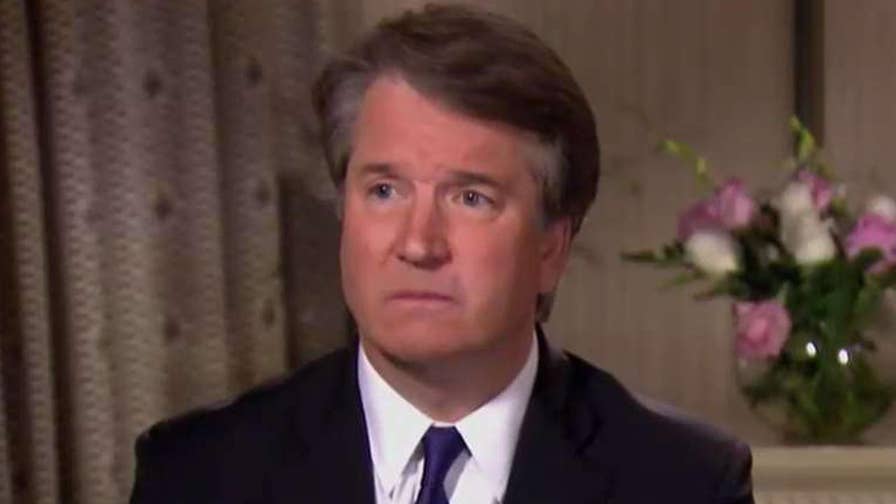 Kavanaugh: I want a fair process where I can be heard

'The Story' exclusive: Judge Kavanaugh says in America 'we hear from both sides.'

If not Judge Kavanaugh, then who? This is the question Republicans should ask themselves as they prepare for Thursday’s Senate Judiciary Committee hearing.

If this decent human being, with an exemplary record as husband, father, friend, and judge can be smeared and maligned, who is going to be capable of surviving the left’s ruthless dishonesty and willingness to lie, intimidate, and destroy?

If the left can succeed in vilifying someone with Judge Kavanaugh’s integrity and record, they will be in a position to say to President Trump, “nominate a moderate who is acceptable to us or we will smear your next nominee into rejection, too.”

Republicans should have no doubt what is at stake in the current desperate, despicable, dishonest smear campaign against Judge Kavanaugh.

The absurdity of the most recent New Yorker smear should make clear what this fight is about – power. When an anti-conservative story is so phony that The New York Times can’t bring itself to publish it, you know it is absurd. The New Yorker has set a new low for defamatory articles with no foundation in facts.

The very dishonesty of The New Yorker smear seems to have liberated Senator McConnell and others to be blunt about the character assassination that is underway.

If Republicans allow Judge Kavanaugh’s confirmation to be defeated by this kind of character assassination, they will have rewarded a level of hatred, vitriol, and viciousness that has never before been seen in judicial confirmations.

Seen in this context, the goal of the Thursday hearing will have nothing to do with seeking the truth. When there is no corroboration for 36-year-old memories, how can the truth be the goal?

Democrats have already practiced the politics of hysteria, defamation, and character assassination. The “Spartacus moment” of Senator Cory Booker was a warning of how hysterical, hateful, and aggressive the Democrats will be. Senator Mazie Hirono’s assertion, "I just want to say to the men in this country: Just shut up," gives you some idea how she will approach the Republican male senators in the hearing.

If the truth is not the goal, then on what should Republicans focus?

Put simply, there is no alternative to confirming Judge Kavanaugh.

The character assassination of conservative judges first succeeded against Judge Robert Bork in 1987 and then failed against Justice Clarence Thomas in 1991. While the left has made Anita Hill a heroine, the fact is, at the time, 11 Democrats joined 41 Republicans in voting for Justice Thomas after dramatic hearings chaired by then-Senator Joe Biden. In fact, since the left has to offer occasional sacrifices to its mythologies, Joe Biden’s 2020 presidential chances may be evaporating as the left brings the Thomas hearings into their current passion. I’m not the only one who thinks so. Look at Willie Brown’s recent column.

This third character assassination campaign is desperately intense on the left because the balance of power on the U.S. Supreme Court is at stake. For more than 60 years, liberals have been able to rely on a left-leaning Supreme Court to impose radical values on America. For six decades, lawyers have dominated the American people and changed policies by judicial fiat, which they could not otherwise get passed through the political process involving American voters.

Now, with Judge Kavanaugh’s nomination, President Trump has threatened to move the balance of power on the Supreme Court to the right for the first time in two generations.

Left-wing radicals understand that this nomination may be an even greater threat to their goal of a radical America than President Trump is.

Judge Kavanaugh is 53 years old. If he stays on the Supreme Court until he is Justice Ginsburg’s age, he will still be writing opinions in 2050. This potential three-decade shift in Supreme Court power is what has galvanized the left into frantic levels of desperate character assassination.

Republicans should be under no illusions.

If they allow Judge Kavanaugh’s confirmation to be defeated by this kind of character assassination, they will have rewarded a level of hatred, vitriol, and viciousness that has never before been seen in judicial confirmations.

Given the left’s willingness to malign even the most honorable nominees, what candidate would let his or her name be submitted? Candidates would have to know that many left-wing activists would be willing to lie about them to destroy their confirmations.

The question for this Thursday’s hearing is: Who governs America?

My prediction is the Democrats will verge on hysteria and employ relentless character assassination for the entire day.

And then the question for the Democratic Senators in the states President Trump carried in 2016 will be: Do you stand with the president or with the left-wing fanatics the people of your state repudiate?

Don’t assume all the pressure will be on the Republican side.

There is now no alternative to confirming Judge Kavanaugh if the politics of denigration are to be defeated.

This is why the answer to my initial question is: There is no second option. There is only victory or defeat.

Newt Gingrich is a Fox News contributor. A Republican, he was speaker of the United States House of Representatives from 1995 to 1999. Follow him on Twitter @NewtGingrich. His latest book is "Trump’s America: The Truth About Our Nation’s Great Comeback.”