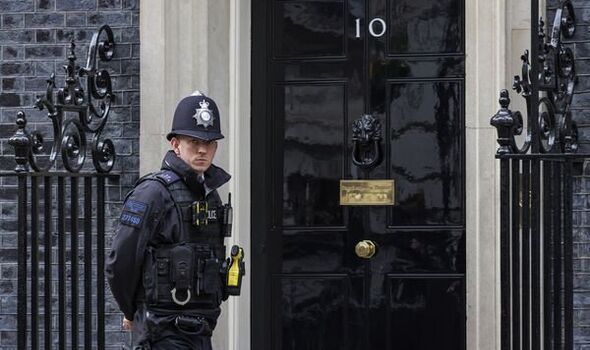 John O’Connor criticised the Yard’s top brass as the latest data revealed there have been an estimated 15,000 house burglaries and 2,700 rape allegations while officers probed allegedly lockdown-busting booze ups at Downing Street. But only a fraction of those crimes has been solved to date. Ex-Commander Mr O’Connor, below, the former head of the Flying Squad, lambasted Yard chiefs saying: “If this was the health service, we would not be concentrating resources on dealing with people with splinters in their fingers. We would be dealing with far more serious matters. This is nonsense!”

He spoke out on the eve of the second anniversary of an infamous garden party at Number 10 on May 20, 2020.

The event is the first in a list of 12 gatherings being probed by the Yard’s Operation Hillman squad.

The Metropolitan Police has refused to reveal how many detectives and civilian staff have been working on Operation Hillman, how much it has cost or when it is expected to end.

So far, there have been more than 100 fixed penalty notices issued over lockdown events at Downing Street and Whitehall.

The list of offenders who have been slapped with fines includes Boris Johnson, his wife Carrie and Chancellor Rishi Sunak.

It is possible the PM, who attended several of the events under scrutiny, could be hit with another fine.

Operation Hillman, with a deputy assistant commissioner in charge, was launched on January 25.

According to the most up-to-date figures, there were 6,525 residential burglaries in the Met area in February and March alone.

So far, only 330 have been solved.  The figure is just five percent of the total.

In the same two months, there were 1,594 reported rape attacks in London although the true number is likely to be higher.

In the same period, there were 3,689 robberies involving the theft of personal property.

Just 346 – or less than 10 percent – have been cleared up by police. The figures are listed on the Yard’s website.

Mr O’Connor said: “In my view, it is about time the Met stood firm and said they are not allowing themselves to be pushed around anymore.

“It is time to draw a line in the sand and say we have had enough of this.”

For weeks, they resisted pressure to launch an investigation into lockdown-busting booze-ups at Number 10.

Senior officers appeared adamant. This was a matter of policy – the Met was not about to issue fines retrospectively.

But the pressure continued and finally, the Yard caved in.

The decision seemed at odds with the ethos of an organisation which prides itself on acting “without fear or favour.”

There was an almighty clamour for Boris Johnson to resign at the time.

Evidence gathered by civil servant Sue Gray apparently confirmed the PM had attended many of the lockdown-breaching events under scrutiny.

Operation Hillman has delayed the full publication of her explosive report.

Calls for Mr Johnson to quit died down meaning he was able to resist pressure to resign even after police fined him, his wife and Chancellor Rishi Sunak for attending his birthday bash at Number 10.

Many observers believed that was when the Yard should have pulled the plug on Operation Hillman.

But inquiries continue with the possibility that the PM could even be slapped with another fixed penalty notice.

The Yard did not want a Partygate investigation – but now it has started, they will keep going until the last offender has been hit with a £50 fine.

Meanwhile, hundreds of rape attacks, thousands of burglaries and other serious crimes are not investigated properly for a lack of manpower and resources.

Scotland Yard is renowned for its skill and expertise in fighting terrorism, solving baffling murders and tackling the most dangerous and sophisticated organised criminals.

Officers did not join the world’s most famous crime-fighting organisation to issue the equivalent of parking tickets to people caught having an illegal drink.

“We know the extent of the offences which were committed. We have made a number of fixed penalty notices – that’s it!”

“We have got far higher priority matters to deal with.”

He added: “If I were the Commissioner, I would be drawing that line in the sand.”

Glen Smyth, the former chairman of the Metropolitan Police Federation, supported the investigation into the Partygate allegations.

He said the Yard should now “get on with it” and bring the probe to a conclusion so that Whitehall ethics chief Sue Gray can publish her full report into Partygate.”

The 12 events probed by police along with four similar gatherings were listed in her initial findings.

Publication of the full report has been put on hold while Operation Hillman continues.

The Yard declined to answer questions about the investigation saying: “We are not giving a running commentary.”