PMQs LIVE: May to clash with Corbyn as PM comes under HUGE pressure to unite Cabinet 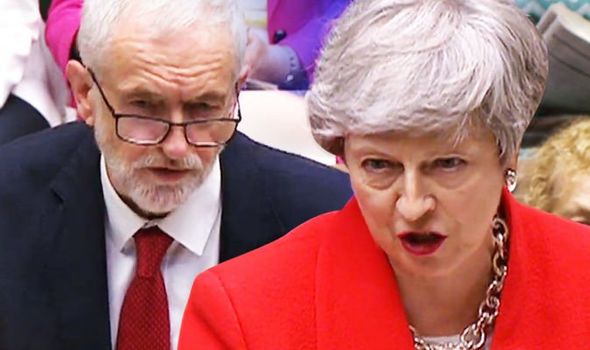 The Prime Minister has vowed to punish disloyal ministers as she prepares to launch a new vote on her withdrawal agreement bill next month. Theresa May has gone on the attack against her Cabinet, and is said to be furious as the collapse of collective responsibility, opening a crunch meeting by threatening to return them to the backbenches if any further breaches arise. Cabinet ministers are committed to pressing ahead with cross-party talks with Labour leader Jeremy Corbyn in a desperate attempt to break the impasse, but warned it is imperative a Brexit deal is voted through Parliament before the summer recess.

Successfully getting the legislation through the Commons over the coming weeks could accelerate Mrs May’s departure from Number 10, with the Prime Minister under increasing pressure to announce her leaving date after three years in the hot seat.

But in another huge blow to the Prime Minister, a majority of members of the European Research Group have vowed to vote against her Brexit deal when it is brought back before Parliament.

Former minister Owen Patterson said he was concerned her deal would leave Britain tied to EU laws, with the DUP concerned it will align Northern Ireland more closely with the bloc than the rest of the UK.

He told the BBC: “Sadly, we will vote against it again, as the DUP put out a statement, because it doesn’t change the essential nature of the withdrawal agreement, which is unacceptable we will have laws imposed on us by 27 different countries where we are not involved.

“And very importantly for the DUP and us it potentially breaks up the United Kingdom by creating a new entity called UK and I and that means you could end with Scotland wanting to follow and that is really dangerous for the union.”

See below for live updates:

Coronavirus: R value ‘rises across England’ and ‘around 1 in North West and South West’