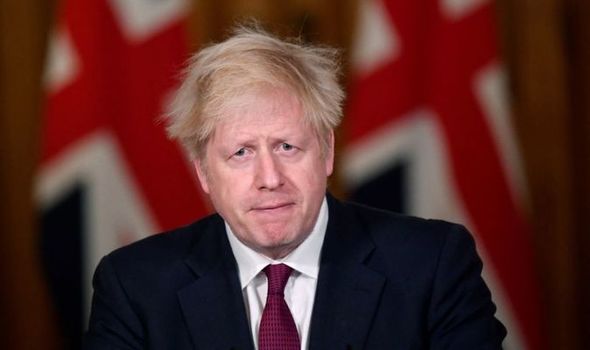 Demands for a return to “normality” have grown as official figures showed Covid cases are now falling in almost every region of the country. Current restrictions, known as Plan B, expire on January 26 and will be reviewed in a fortnight by ministers.

The measures include guidance to work from home where possible, plus a requirement for wearing masks indoors and vaccine passports for large events.

Mr Johnson is being urged to prioritise ending work-from-home guidance in an effort to boost economic growth.

UK Health Security Agency statistics show Covid rates are on their way down in eight of England’s nine regions, suggesting the worst of the Omicron surge may now be over.

With the number of coronavirus cases falling again yesterday to 120,821, down 13.1 per cent on last week, Professor David Heymann said the UK is the closest of any country in the northern hemisphere to exiting the pandemic.

He said: “The countries we know best in the northern hemisphere have varying stages of the pandemic.

Prof Heymann, from the London School of Hygiene and Tropical Medicine, said population immunity in the UK is already high which is “keeping the virus and its variants at bay”.

With Covid cases only rising in the Northeast, there are hopes that many restric- tions could be relaxed by the end of the month. The Prime Minister said last week he hoped Britain would return to something “much closer to normality” by then.

Scientists have said working from home is one of the most effective interventions in reducing the spread of Covid.

But major firms have insisted they would bring more employees back into the office if the Government’s policy on working from home changes while hospitality bosses have renewed calls for the guidance to end.

Pubs, bars and restaurants in city centres have been hit hard by the lack of office workers going out for lunches, dinners and drinks after work, with many venues not opening this month due to low customer numbers.

The British Beer and Pub Association called for a timeline similar to last year’s roadmap so businesses can prepare for customers coming back. Chief executive Emma McClarkin said: “A lot of operators have closed venues in city centres throughout January because of the Government’s messaging on work from home.

“We need to know when it will come to an end as we are really struggling under the guidance to be viable in towns and city centres.

“We have also been encouraged by the potential move to a five-day isolation period. We need the message from the Government to change in order to restore consumer confidence.”

Industry body UK Hospitality called for it to be reviewed in the same way.

Chief executive Kate Nicholls said masks and Covid passports have an end date and called for the same for working from home.

“We need to drop the work from home guidance as early as we can, but we need a timeline as well.”

She said hospitality businesses in city centres are seeing sales around 50 per cent lower than would be expected, with the drop off in London a devastating 80 per cent.

The Prime Minister’s official spokesman said there were currently no plans to remove working from home guidance.

But he added: “We’d obviously want to remove that as soon as is right to do so.”

The Government yesterday said a further 379 people had died within 28 days of testing positive for Covid-19, bringing the total to 150,609.

Data shows that the North-east – the only area not to record a dip – currently has the highest infection rate (2,597.4 cases spotted for every 100,000 people in the week ending January 5).