White House press secretary Jen Psaki did not say Thursday whether the Biden administration will require vaccines for migrants coming across the southern border even as she acknowledged that the administration is considering mandating vaccines for foreign travelers entering the United States.

Psaki was asked repeatedly about the specifics of the administration’s internal deliberation regarding requirements for international travelers. She did not go into specifics and said the U.S. is “not at that point” of relaxing travel rules “because of the delta variant.” She did say mandating vaccines is “strongly under consideration.”

But Psaki dodged a question directly asking whether the administration would require migrants in the custody of the Department of Homeland Security (DHS) to get vaccinated as hundreds of thousands rush across the U.S. border every month. Thousands of them are being released into American cities.

“That’s not what the CBP is doing,” Psaki said of Customs and Border Protection (CBP) administering vaccines. “There are NGOs and other international organizations who are vaccinating migrants as they come across the border as they work in partnership with us. Certainly that helps keep a range of people safe in the country.” 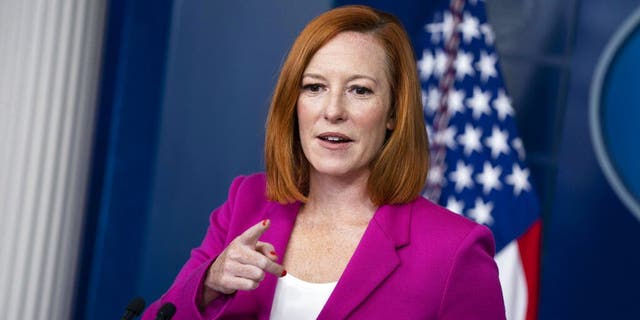 The Biden administration has come under fire for its handling of the migrant surge, which Republicans blame on the president’s dovish comments on immigration when he was campaigning. The White House meanwhile blames the Trump administration for the current crisis, saying that it hollowed out DHS infrastructure to process incoming migrants during the past four years.

The situation is only getting worse, according to Rep. Henry Cuellar, D-Texas, whose district is on the southern border. He’s been highly critical of the president’s handling of the border and appeared at a lengthy press conference last week with Sen. Lindsey Graham, R-S.C.

The pair suggested that President Biden name a new border czar, to replace the leadership of Vice President Kamala Harris on the issue. Her main focus has been on “root causes” of immigration rather than border security.

“You hear about safety concerns… People cross and they’re walking through the streets and neighborhoods,” Cuellar said. “And there have been lockdowns in schools because they’re right at the border and people just come in through they’re worried about their kids.”

“The mayor of Laredo said ‘We’re still pretty safe, but I worry about where we’re going to be as a community in the next six months,'” Graham said of a phone call he conducted with local leaders. “The police chief said the resources I have now are beyond my the problems that I’m having to deal with there, beyond the resources. But every passing day, it gets worse.”

The White House emphasizes that it hasn’t rescinded Title 42, which is a a policy to expel many migrants at the border due to the pandemic implemented by former President Trump. It’s also pointed to its work on expedited removal. But many migrants nevertheless are being allowed to walk free in the United States.

“Since mid-February of 2021 there have been over 7,000 confirmed COVID-19 positive immigrants released into the city of McAllen by [Customs and Border Protection], including over 1,500 new cases in the past seven days,” a statement released by the city of McAllen, Texas this week.