Rep. Thomas Massie posted a Christmas photo to Twitter showing his family with guns, setting off a frenzy of liberals condemning the Republican lawmaker.

The photo spread like wildfire on social media, with tens of thousands of likes and quote tweets, as well as thousands of people slamming Massie as “demented” and an example of a “White Privileged Christmas.” The photo was posted just days after the Michigan high school shooting, which left four dead and seven others injured.

Former White House communications director during the Trump administration, Anthony Scaramucci, also weighed in to say: “If you are running against this a-shole please contact me I will give you dough.”

Another Twitter user responded to the tweet telling Massie, “The bar was on the floor, but somehow you managed to tunnel underneath it.”

Massie responded with the hashtag “#sassywithmassie” and saying, “The BAR is under the couch.”

Supporters of the photo and Massie have meanwhile celebrated the viral post, calling it “perfect” and the “best Christmas photo” 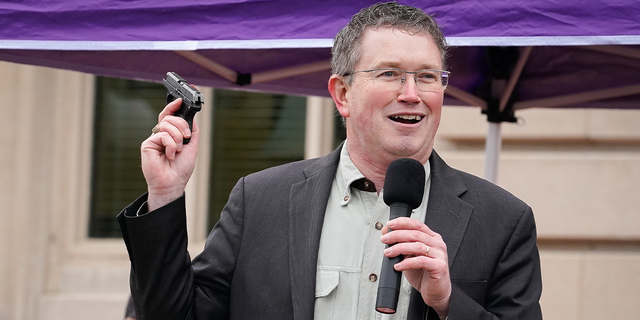 FRANKFORT, KY – JANUARY 31: Rep Thomas Massie (R-KY) draws a Ruger LCP handgun from his pocket during a rally in support of the Second Amendment on January 31, 2020 in Frankfort, Kentucky. Advocates from across the state gathered at the Kentucky Capitol in support of the Second Amendment. The rally will include speeches from Rep. Thomas Massie (R-KY) and former Washington, D.C. Special Police Officer, Dick Heller.
(Bryan Woolston/Getty Images)

“The recent election results present us with a new opportunity to advance pro-gun legislation and reverse the erosion of the Second Amendment that’s occurred over the last few decades. I look forward to working with the new President and this determined group of conservatives to promote a pro-gun agenda,” Massie said at the time, which followed the 2016 general election.