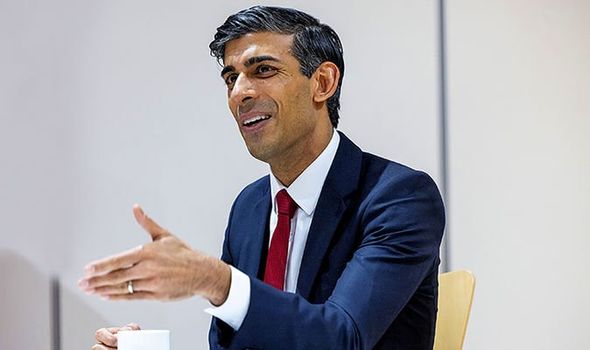 The Chancellor said his Budget tax cut for two million people ‑ coming into force today ‑ is a first step that shows the country can have “confidence” in his determination to ease the financial burden on millions of households feeling the cost of living squeeze. “Actions speak louder than words,” he said, adding: “I mean it and I’m already getting on and delivering it.”

He was also upbeat about the UK’s economic recovery from Covid, despite the concerns surrounding the new Omicron variant of the disease.

“There’s lots to be positive about when it comes to the economy at the moment,” he said.

Mr Sunak spoke to the Daily Express yesterday during a visit to a community centre in Westminster to mark the tax cut for Universal Credit claimants.

Just a short walk away from his Treasury HQ, the Chancellor chatted to a benefit claimant and a work coach about how today’s tax change will help boost the incentive to work.

The measures, announced at the Budget in October, will mean two million of the lowest-paid workers in the country can hold on to an extra £1,000 of their earnings each year.

Mr Sunak said the cut in the “taper” levy on earnings from 63 percent to 55 percent and £500 increase in the Work Allowance showed he is a low-tax Tory ‑ despite his March Budget tax hikes to support the NHS and social care following the impact of Covid.

He said: “I think actions speak louder than words. And that’s why this announcement is important.

“This policy coming into force before Christmas is important, because it’s all very well me saying what I want to do. I should be judged on what I am doing.

“And what I am doing is cutting taxes for millions of the lowest-paid people in our society, quite significantly at a time when I think it’s going to make a real difference.

“And that should give people the confidence they need to know that when I said my goal is to reduce taxes over the course of this Parliament, I mean it ‑ and I’m already getting on and delivering it.”

Mr Sunak said he felt “deeply” about the need to let people in work keep more of their earnings by reducing the tax burden.

The Chancellor went on: “It’s something I’m really proud of, this policy. I said at the Budget that my goal was to reduce taxes and, in particular, to see that working people keep more of their hard-earned money.

“And to me, this is the first step in delivering on that pledge, which is why I’m proud that we’re able to make it happen and make it happen in time for Christmas.

“It’s going to make a real difference to people’s lives.”

He added: “It rewards work, which is something that’s important to me.

“I believe deeply in the power of work to help people and so it’s very much in tune with my values.

“It is what I said at the Budget I wanted to do, so I’m delighted that we’re able to deliver it and deliver it soon.

“The reason for that is work is central ‑ not just because it puts, you know, pounds and pennies in your pocket and your bank account. Of course, that financial security is vital. But it’s much more than that, you know, work gives people purpose and fulfilment in life.”

Asked whether he remained optimistic about the economic recovery despite the concerns about the latest Covid variant, the Chancellor pointed to the way the UK economy had defied the predictions of doom mongers throughout the devastating pandemic.

He said: “It’s something that we should collectively as a country feel really proud of.

“You know, a year and a bit ago, I was being told that unemployment was going to spiral up to decades highs and millions and millions of people would be on the dole ‑ and after suffering one of the sharpest economic shocks this country’s ever seen.

“What we are seeing actually is that unemployment has been heading down for eight, nine months in a row; employment is at record high; wages are growing and, you know, jobs are available everywhere.

“That’s a huge, huge positive and not something that anyone expected.

“I think that’s in part because of the actions that the Government took, whether it was a furlough scheme or helping businesses get through so they could rebound strongly and hire people back. All those interventions have made the difference.

“And that’s why, you know, we’re fortunate now to be enjoying a very jobs-rich recovery.”

Mr Sunak insisted the Government’s response to the Omicron concerns was “proportionate”.

He said: “I think we’ve taken targeted and temporary proportionate measures to the risk that we face.

“So I think it’s a responsible and balanced response and that’s to give us time to assess and learn more.

“That’s the right thing to do.”

Government measures will continue to support hospitality firms in the period when some businesses are concerned about Christmas parties being cancelled in response to the variant concerns, he added.

“The hospitality industry has obviously had a difficult year-and-a-half and that’s why we put so much support in place to help them get through it.

“And I did that because they employ lots of people.

“They’re important parts of our communities, whether it’s local pubs or restaurants.

“And there’s still support in place actually, so that the temporarily reduced rate of VAT for hospitality runs all the way through to next spring.

“A huge discount on hospitality business rates runs all the way to next spring.

“And then there’s yet more discounts for next financial year as well, which we’ve already announced. So there’s things in there that will continue to benefit them.”