Sacramento County supervisors walk out of board meeting over mask violations

Two Sacramento County, Calif. supervisors walked out of a board meeting on Tuesday after seeing others in the room not wearing masks, which are still required in the building for another week.

“It’s disconcerting to look out in the audience and see so many people flagrantly ignoring the requirements,” Supervisor Patrick Kennedy said in the meeting, according to KOVR-TV in Sacramento. “I don’t care if you’re in the public chambers, at the bus, or if you’re at the French Laundry. You wear a mask.”

Kennedy was referring to Gov. Gavin Newsom’s infamous evening out at Napa Valley restaurant French Laundry last fall when he was advising Californians to stay home.

Kennedy had a heated back and forth with some members of the audience before he and Supervisor Phil Serna decided to leave the chambers to finish the meeting virtually from their offices.

“When we, the county, are setting the rules for others we need to follow those rules too. We simply cannot preach water and drink wine,” Kennedy later told KOVR of the incident. 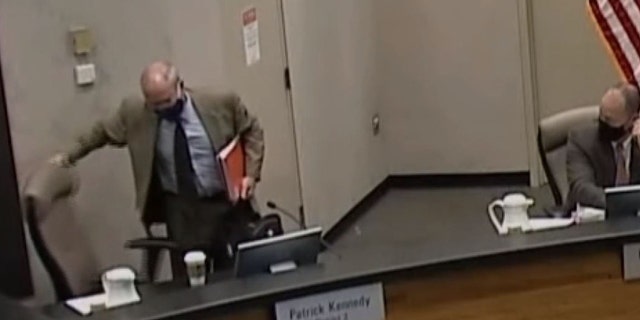 Supervisor Patrick Kennedy opts to finish the county board meeting from his office Tuesday after voicing frustration with audience members not wearing masks, a violation of the chamber.
(Sacramento County )

He said he felt audience members not wearing masks at the meeting was a “thumbing of the nose at public health officials” and he decided he couldn’t “sit idly by” as people violated the rules.

Kennedy agreed some might think he was being overly dramatic by leaving the meeting.

California plans to lift mask-wearing requirements for most places on June 15.