Police and firefighter unions, medical professionals and teachers are fighting against President Biden’s and local officials’ vaccine mandates, saying that America is a country of freedom and they will not comply with government overreach.

"Over the past couple of weeks, the idea of forced vaccination has caused much concern across the entire country," Riverside County, California, Sheriff Chad Bianco said in a statement released Monday. "I will not enforce the vaccine mandate on Sheriff's Department employees."

Biden announced last week that companies with more than 100 employees must require vaccinations or weekly coronavirus testing, which affects as many as 100 million Americans. Employers who break the rules could face fines of $14,000 per violation.

"The government has no ability and no authority to mandate your health choices," Bianco continued. "As your sheriff, I have an obligation to guard your liberty and freedom."

Bianco’s comments are emblematic of the sentiment of many police officials, nursing groups, firefighters and teachers across the nation who are trying to hit the brakes on the government mandating vaccinations or face termination.

Some have even decided to walk off the job. Nurses in a maternity ward at a hospital in upstate New York resigned over the state's vaccine mandate, forcing the hospital to temporarily halt all baby deliveries after Sept. 24.

While in Alabama, medical professionals are bracing for a worsened staffing shortage over Biden's federal vaccine mandate if vaccine hesitant employees quit rather than comply.

"So what we want to see is everybody get vaccinated, and we want that to happen in a way that doesn’t force people to make a dichotomous choice to either stay in health care and get vaccinated or get out of the health care system," president of the Alabama Hospital Association, Dr. Don Williamson, told WSFA, noting that the staffing shortages in the state are already "dire."

Other local leaders in areas such as California and New York have also issued vaccine mandates in their jurisdictions with penalties such as termination.

Resistance to the mandates, however, has intensified since Biden’s announcement. The world's largest organization of sworn law enforcement officers, the National Fraternal Order of Police, issued a statement emphasizing vaccination is a "personal decision."

"It is the position of the National FOP that vaccinations work to prevent people from becoming infected by or transmitting COVID-19," the National Fraternal Order of Police said in a press release Monday.

"However, the National FOP asserts that whether or not to accept the vaccine is a personal decision that our members should make for themselves after consultation with their doctor or other medical professionals. We will continue to be engaged with the Administration, Governors, and other elected leaders on these matters as vaccine and testing policies are implemented at every level of government."

In New York, the issue of government mandates has raged and was put on full display Monday, when a massive protest organized by Teachers for Choice was held in Foley Square, and continued onto the Brooklyn Bridge. 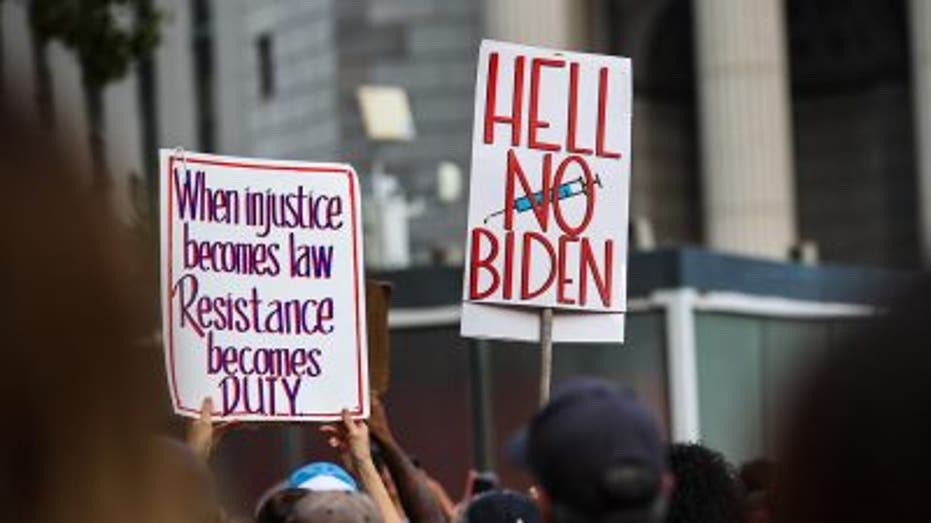 BUSINESS OWNER REACTS TO SWEEPING VACCINE MANDATE: BIDEN IS 'NOT ON THE SIDE' OF SMALL BUSINESSES

"F–k Joe Biden," people chanted while walking across the Brooklyn Bridge. They also carried signs reading, "Last years heroes, this years unemployed," "My body, my choice," and "I call the shots."

"I have lived and worked in this city as a civil servant for 28 years of my life," retired teacher Amy Carroll said of the vaccine mandate. "I should be able to make my own health decisions and make a decision that doesn’t affect my employment that doesn’t affect my right to go to a restaurant, or a Broadway play, a museum." 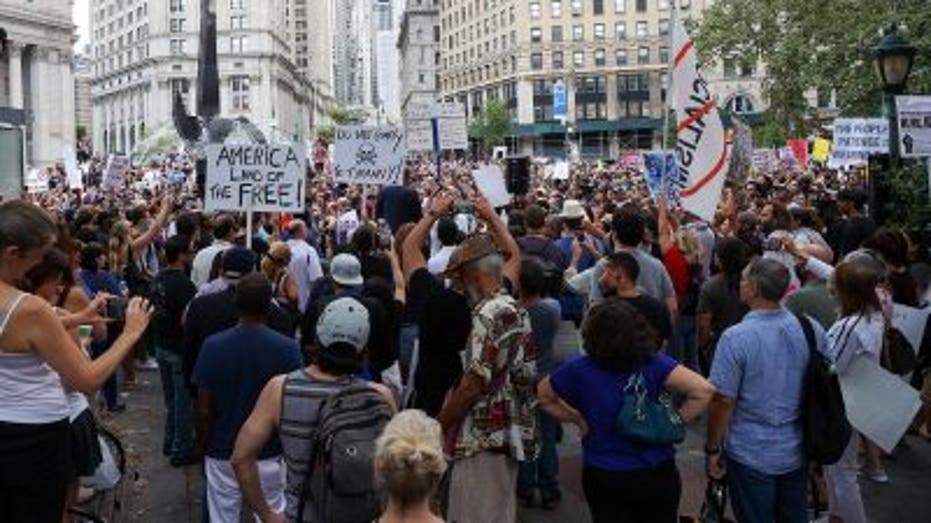 Carroll’s comments follow what many people have said during protests of the vaccine mandates: They want the freedom to choose whether or not to be vaccinated.

Dozens of people in Boulder, Colorado, also protested on Monday, standing outside the county board of health building holding signs reading: "It’s not about the virus. It’s about control," "Defend medical freedom," and "No vaccine passports."

In California, the president of the San Jose Firefighters Local 230 echoed more of the same and added that a local vaccine mandate might lead to staffing shortages.

"Our message has been consistent through all of this process," Matt Tuttle, president of San Jose Firefighters Local 230, said "While we strongly encourage all of our members to be vaccinated, we are against a vaccine mandate. We do not believe anyone should be terminated over the vaccine."

Tuttle stressed that the area needs as many firefighters as possible during the ongoing fire season, and worries the mandate will push some to quit.

"We need every firefighter that we possibly can to still fight wildfires, still respond to calls in our own city and still mitigate emergencies," Tuttle said. "We don’t want to see a single firefighter walk off the job over this mandate."

The protests have also spread to legal action, including in New York on Monday, when more than a dozen medical professionals sued the state in federal court, arguing that requiring all hospital and nursing home workers to be vaccinated is unconstitutional.

The majority of the plaintiffs, who are Catholic, said they refuse to get the shot "with the available COVID-19 vaccines, all of which employ aborted fetus cell lines in their testing, development, or production."

The lawsuit isn’t an isolated one, with the number of vaccine mandate-related suits cropping up from coast to coast.

Employees of the Los Angeles Police Department have filed a federal lawsuit over the city’s mandate, while the state of Arizona sued the Biden administration over the president’s mandate on Tuesday. Employees of North Charleston in South Carolina have also sued the city over its vaccine mandate, and a coalition of police and firefighters in Washington filed suit against liberal Gov. Kate Brown over her requirement state workers get vaccinated.

Many of those who refuse to comply with the mandate face termination. The U.S. Army announced on Tuesday that it is implementing the vaccine mandate and soldiers who refuse could face "relief of duties" or "discharge," while employees of the city of Newark in New Jersey face termination if they refuse the vaccine, and the Los Angeles County Superior Court warned its employees last month that they must show proof of vaccination or be terminated.

Biden’s mandate on the vaccine has meanwhile been hit with criticisms from conservatives and others who have overwhelmingly responded with the same message: It’s unconstitutional.

And Republican South Dakota Gov. Kristi Noem said: "My legal team is standing by ready to file our lawsuit the minute @joebiden files his unconstitutional rule."

The Biden administration has meanwhile has stuck by its stance that getting the vaccine is a matter of life and death and "not about freedom."

"We've been patient but our patience is wearing thin and your refusal has cost all of us," Biden said from the White House last week. "This is not about freedom or personal choice. It's about protecting yourself and those around you."