Sir Keir Starmer walked onto stage to uplifting, optimistic mood music for his speech at Labour conference. Doing away with well-known chart songs that so often welcome party leaders, he opted for vibes and vibes alone.

That largely summed up the contents of Sir Keir’s entire speech.

Minus a bold policy on the energy sector, the whole 45-minute address from the Labour leader lacked any substance. it relied purely on the mood.

He set a target for 70 percent home ownership. Any sign of a plan on how to achieve it? No.

He made a commitment to put “country first, party second”. Any clue what that actually means? No. 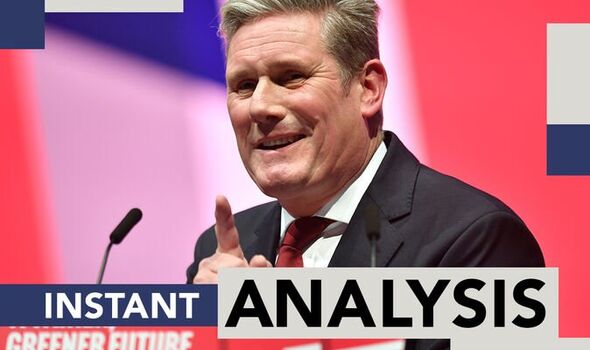 He pledged to “get us out of this endless cycle of crisis”. Any suggestion on why Labour could now be trusted after going through years of internal crises itself… certainly not.

But there were cheers and applause from party members as the Holborn and St Pancras MP proudly declared Labour was on the brink of election victory, and the entire hall gave off a buzz of confidence.

This was a very different conference speech to 12 months ago. No longer did Sir Keir look nervous on the stage as he addressed his own members, and no longer were Left-wing Corbynites heckling him during his delivery.

“The party wants to win and the party believes it can win,” one senior Labour source said afterwards.

Optimism alone is often not enough to win an election. Labour will have to do more than that if it is to convince the country to back them at the polls.

Sir Keir’s speech spent more time today setting out that Labour is what the Tories aren’t rather than putting forward original ideas about what the party stands for.

Labour has set out why you shouldn’t vote Tory but the question “why vote Labour?” remains unanswered.

There is no doubt that under the tenure of the current party boss Labour has made huge steps forward.

Whether he had the ability to finish the job remains to be seen.