“When you look at the credentials that Judge Kavanaugh brings to the job, it’ll be very difficult for anyone to argue that he’s not qualified for the job. He clearly is qualified for the job,” Collins told reporters on Tuesday when asked whether she faced an easier decision with Kavanaugh than Judge Amy Comey Barrett, who was on the president’s short list and is seen as more hostile to reproductive rights.

The moderate GOP senator added, however, that she would take into consideration “other issues involving judicial temperament and his judicial philosophy” before making a final decision.

Collins has previously said she would not support a replacement for retiring Supreme Court Justice Anthony Kennedy who would oppose the 1973 Roe v. Wade ruling that legalized abortion rights nationwide. But she also supported Justice Neil Gorsuch, Trump’s first Supreme Court nominee, as well as Justice Elena Kagan and Justice Sonia Sotomayor, who were nominated by Democratic President Barack Obama.

“I will go through the same process [as previous nominees]. Obviously, this is a very important responsibility and I take it very seriously,” Collins said, adding that she would make her decision after meeting with Kavanaugh in the weeks to come.

Many Democrats voiced opposition to Kavanaugh’s nomination on Monday, warning that he would swing the bench to the far right and likely imperil the future of abortion rights and health care access. They noted that Trump previously vowed to pick justices who would overturn Roe and strike down the Affordable Care Act, Obama’s signature legislative achievement, commonly known as “Obamacare.”

Collins, one of three GOP senators who opposed efforts to repeal Obamacare last year, said Tuesday that health care issue is “very important to me” in considering Kavanaugh’s candidacy. But she also noted that the judge has faced criticism from some conservatives who are concerned by his previous rulings on the Affordable Care Act. In 2011, for example, when Kavanaugh dissented from a District of Columbia Circuit opinion upholding the law, he cited procedural reasons, not constitutional grounds as conservatives had hoped.

“The justice has already rendered one decision on the Affordable Care Act that frankly was criticized by conservatives of not going far enough,” Collins noted on Tuesday.

Still, it’s not entirely clear how Kavanaugh views the law, despite his D.C. Circuit dissent. Conservative writer Phil Klein wrote Tuesday in The Washington Examiner: “It’s worth cautioning that how Kavanaugh ruled at the appellate court level may not be an indication of how he would have ruled were he on the Supreme Court in 2012 … the nuance of his opinion contains some positive signs and makes any sort of firm conclusions hard to draw.” 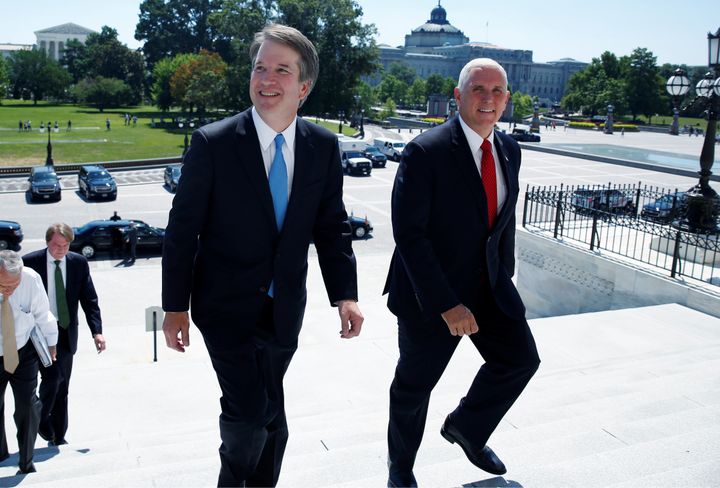 But the conservative criticism of Kavanaugh could give Collins and fellow GOP moderates, like Lisa Murkowski of Alaska, an out if they want one. Both Collins and Murkowski are facing pressure at home to reject Trump’s Supreme Court nominee.

“If she wants to find an excuse to vote yes, she can certainly come up with something, but it would undo what she did for her constituents when she [voted to block the repeal of Obamacare] in the first place,” said Jesse Ferguson, a Democratic consultant who works with health care groups. “The Trump administration has already gone to court to strike down health care protections for pre-existing conditions, so she either stops them from having a judge who could tip the balance or she lets it happen.”

The Supreme Court could be asked to rule on another challenge to the health care law in the future, raising the stakes over its new member even higher. Last month, the Justice Department threw its support behind a lawsuit arguing that Obamacare’s protections for people with pre-existing conditions are unconstitutional.

Some undecided Democrats also cited health care as a key factor in their consideration of Kavanaugh. Sen. Joe Manchin (D-W.Va.), who is up for re-election in November in a state where Trump is overwhelmingly popular, tweeted Monday that he too was looking forward to meeting with Kavanaugh to discuss his “judicial philosophy & perspective on access to healthcare for WVians with pre-existing conditions.”

Manchin also supported Gorsuch, and Republicans will be looking to win his vote on Kavanaugh as well.