House impeachment managers built their case against former President Donald J. Trump on Wednesday, methodically using video and audio clips to argue that Mr. Trump was responsible for the deadly assault on the Capitol on Jan. 6. Throughout much of the day, the managers let Mr. Trump and his supporters do the talking, showing videos of Mr. Trump’s speeches, his Twitter posts and footage of his supporters answering his rallying cries that began months before the attack.

Here are some takeaways from the second day of the trial.

For a time on Wednesday, @realDonaldTrump was back. 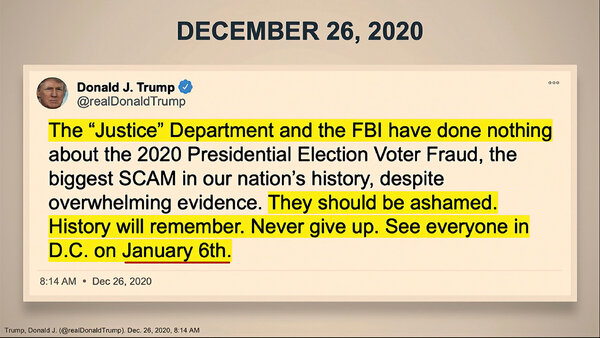 In their efforts to prove that Mr. Trump was undeniably behind the attack, House impeachment managers let the former president tell the story in his own words, airing a Trump Twitter blitz worthy of the former tweeter in chief himself. This time, however, his posts were marked with a “PROSECUTORS’ EVIDENCE” stamp.

The managers repeatedly referred to the Dec. 19 post as a “save the date” for Jan. 6.

On Dec. 26, he wrote: “The ‘Justice’ Department and the FBI have done nothing about the 2020 Presidential Election Voter Fraud, the biggest SCAM in our nation’s history, despite overwhelming evidence. They should be ashamed. History will remember. Never give up. See everyone in D.C. on January 6th.”

It’s been 33 days since the world has seen a new Trump tweet, after nearly four years of Mr. Trump using the social media platform to build his base of supporters and blast out his unfiltered messages.

What You Need to Know