The Texas House Speaker apologized Tuesday for “terrible things” he allegedly said about House colleagues on a secretly recorded conversation with a conservative activist, reports said.

Speaker Dennis Bonnen, a Republican, sent out an apology email to the 149 members of the state House. The apology stemmed from his alleged remarks during a June meeting with Michael Quinn Sullivan, a conservative activist. He was also with state Rep. Dustin Burrows.

“I was stupid to take a meeting with an individual who has worked hard to divide our House,” Bonnen said in an email addressed to House members Tuesday. “I said terrible things that are embarrassing to the members, to the House, and to me personally.” 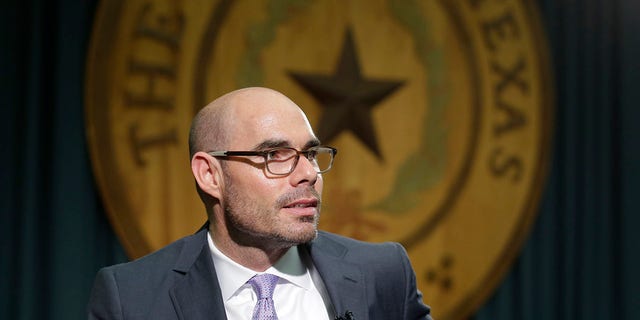 FILE – In this May 15, 2015, file photo, Texas Rep. Dennis Bonnen, R-Angleton, talks to the media at the Texas Capitol in Austin, Texas. (AP Photo/Eric Gay, File)

Sullivan, the CEO of Empower Texans, a conservative non-profit focused on promoting free-market principles in the state, claimed that Bonnen and Burrows spoke about offering his organization House media credentials in exchange for making attacks against a “hit list” of 10 Republican House members they wanted to target before the 2020 primary election, the Texas Tribune reported.

Bonnen admitted to trash-talking fellow Republicans in Tuesday's email but did not mention the alleged list. He previously denied the existence of the list and demanded Sullivan make the full recording public. Meanwhile, Sullivan has privately played the tape to several House Republicans, the report said.

State Rep. Tan Parker, a Republican on the alleged list, said that he listened to the secret recording and can confirm that Bonnen and Burrows “did engage in targeting specific members of the Republican Caucus.”

"I find this reckless ambition to be absolutely disgusting. Their actions directly contradict the bylaws and culture of our Caucus. The disparaging commentary that was also heard was the epitome of disrespect and a clear attack on the values of the Republican Party and the integrity we have established in the Texas House," Parker said.

Bonnen's office did not immediately respond to an after-business-hours email from Fox News.

More than two dozen state House Republicans said on Twitter that they accepted Bonnen’s apology and benefitted under his leadership, the Texas Tribune reported. Bonnen promised to meet with House members individually in the coming weeks.