This is America: I’m still grieving the Atlanta-area spa shootings

The nation is mourning another mass shooting, the second in less than a week. But even as we grieve the 10 lives taken in Boulder, Colorado, I am still mourning those killed in the Atlanta area on March 16.

Welcome to the “This is America” newsletter centered on race, identity and how they shape our lives. I’m Eve Chen, a senior video producer with the USA TODAY Network and co-chair of Gannett’s Asian American employee resource group.

As adults, we’re asked where we’re from, no, where we’re really from. We’re told we speak English well, even if we’ve lived here our whole lives. We’re fetishized as women or desexualized as men. We’re blamed for COVID-19, as witnessed by one in four Americans, according to a USA TODAY/Ipsos poll conducted last week.

Of course most people don’t mean to be racist, unconsciously centering themselves and keeping others outside. But a lifetime of microaggressions coupled with actual violence against Asian Americans throughout the pandemic creates cumulative trauma, which reached a tipping point with the Atlanta-area spa shootings.

But first, race and justice news we’re watching this week:

Too close to home

The shootings hit especially close for those of us who call the Atlanta area home. My old newsroom is just blocks away from two of the spas where women who looked like me were gunned down.

Whatever the stated motive or charges, my local and larger Asian American community felt attacked, again.

Every day for months, Asian Americans around the country have been beaten, pushed to the ground, spat on and indeed killed. Stop AAPI Hate reported nearly 3,800 anti-Asian incidents over the past year, mostly targeting women. Asian Americans also reported the biggest increase in serious online hate and harassment incidents, according to an Anti-Defamation League survey shared exclusively with USA TODAY, with 17% reporting sexual harassment, stalking, physical threats and more.

We’ve had an entire pandemic’s worth of fear and frustrations unloaded on us. The bullies never went away.

We’ve been here before

It’s scary, but I refuse to live in fear in my own country.

The morning after three local Asian American businesses were attacked, I went out to support three others: a restaurant, a food stall and a grocery store. A few days later, I supported three more. After a year of enduring the dual threats of COVID-19 and racism, I wanted local business owners and workers, who reminded me of my own parents years ago, to know now is not the time to close their doors.

From one of the largest lynchings in U.S. history, the Chinese Massacre of 1871, to the WWII internment of 120,000 Japanese Americans to the 1982 murder of Vincent Chin, a Chinese American killed by two Detroit autoworkers who blamed industry struggles on Japan, we’ve faced so many hardships since Asians first arrived on U.S. shores in the 19th century. 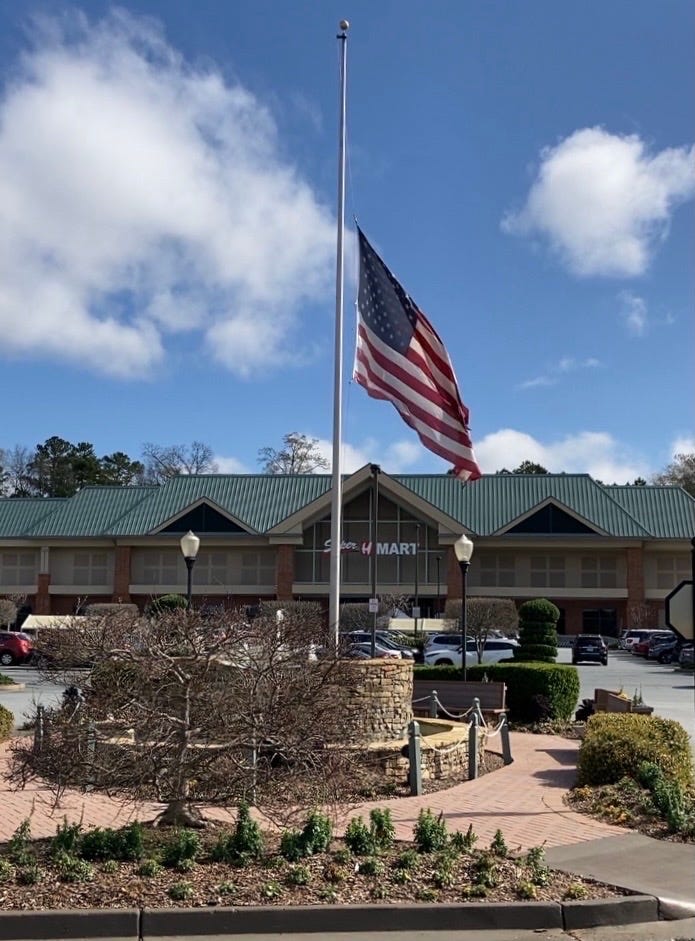 The flag flies at half-staff in Duluth, Georgia, on March 18, 2021, two days after the Atlanta spa shootings. (Photo: Eve Chen)

I was reminded of our resilience last week when I stopped by one of my favorite Asian American shopping centers in Duluth, Atlanta’s Koreatown. Seeing the flag fly at half-staff in front of the H Mart, I remembered: We are grieving, but we are still standing and strong.

Stand with us. Reach out to Asian American friends and colleagues without burdening them to share or educate you. Do the work to learn about Asian American experiences and history by reading up or watching relevant documentaries. Amplify Asian American voices and concerns and call out anti-Asian racism. Hollaback! and Asian Americans Advancing Justice are offering free bystander training sessions through April. #StopAsianHate

This is America is a weekly take on current events from a rotating panel of USA TODAY Network journalists with diverse backgrounds and viewpoints. If you’re seeing this newsletter online or someone forwarded it to you, you can sign up here. If you have feedback for us, we’d love for you to drop it here.