The chairman of the Democratic Congressional Campaign Committee responded to the Kyle Rittenhouse “not guilty” verdict with a statement that included significant factual errors, and a senior adviser to the committee tweeted “no justice, no peace.” Rittenhouse was acquitted on all charges stemming from the fatal shooting of two men during the violent riots in Kenosha, Wisc. last summer in the wake of the police shooting of Jacob Blake.

“It’s disgusting and disturbing that someone was able to carry a loaded assault rifle into a protest against the unjust killing of Jacob Blake, an unarmed Black man, and take the lives of two people and injure another – and face absolutely no consequences,” DCCC chairman Democratic Rep. Sean Patrick Maloney said in a statement Friday.

Jacob Blake was paralyzed by the shooting, not killed, and was in fact armed with a knife. The police officer who responded to the domestic disturbance call that led to Blake’s shooting was not charged either by the state or the federal government after investigations.

Blake was shot seven times by a Kenosha police officer, after police responded to a 911 call from the mother of Blake’s children on August 23, 2020. Blake had several warrants out for his arrest for several charges, including disorderly conduct and third-degree sexual assault. Police tried to arrest him and after a brief tussle with officers, Blake moved toward the front of his car.

“I realized I had dropped my knife, had a little pocket knife. So I picked it up after I got off of him because they tased me and I fell on top of him,” Blake told “Good Morning America” in January, admitting that he was armed at the time he was shot.

A second version of the DCCC statement was later released that referred to the “unjust shooting of Blake” and removed the claims that he was killed and that he was unarmed. That statement, tweeted by DCCC senior adviser of strategic outreach Dyjuan Tatro, says Rep. Maloney’s statement “does not mince words.” It does omit Maloney’s previous incorrect claims that Blake was unarmed and was killed. 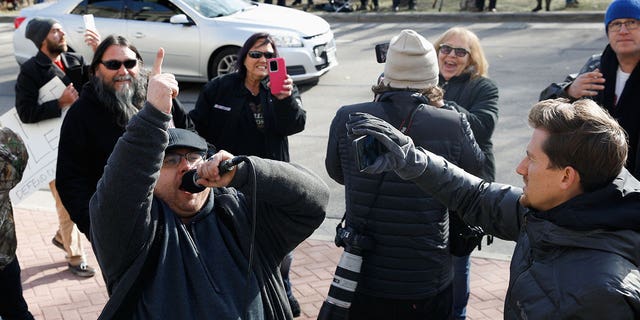 People react to the verdict in the trial of Kyle Rittenhouse, outside the Kenosha County Courthouse in Kenosha, Wisconsin, U.S., November 19, 2021.
(REUTERS/Brendan McDermid)

Tatro personally responded to the news that Rittenhouse was found not guilty on all charges by tweeting “no justice, no peace” which was often chanted by rioters who destroyed cities across the country in response to the death of George Floyd in 2020.

Some on social media viewed that tweet as condoning violence in response to the verdict.

“This is incitement to violence,” one Twitter user wrote while another posted, “A @dccc advisor calling for violence, imagine that.”

“I do not believe that convictions equal justice,” Tatro also tweeted. “But I am convinced that the “not guilty” verdict constitutes a great injustice today. The American legal system is rooted in racism and functions to uphold white supremacy.”

The DCCC did not respond to multiple requests for comment from Fox News Digital.

Rittenhouse was declared not guilty on all counts by a jury on Friday after he had been charged in the shooting deaths of two people and the wounding of another during a riot sparked by the Blake shooting in Kenosha last year.