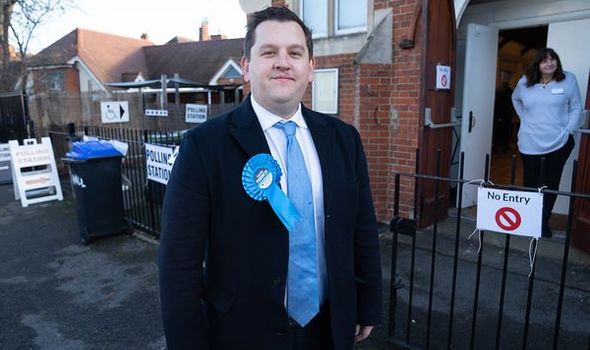 Conservative candidate Louie French retained the true-blue stronghold of Old Bexley and Sidcup for the party in the poll triggered by the death of former minister James Brokenshire. And the Prime Minister gave his party another boost by hitting the campaign trail last night for another byelection later this month.

He made a brief visit to Oswestry in the North Shropshire constituency vacated by the resignation of veteran MP Owen Paterson.

In the Old Bexley and Sidcup poll, in South-east London, Mr French won with 51.5 percent of votes, down from the 64.5 percent secured by Mr Brokenshire in 2019.

Turnout was low compared with the last election, and the Tory majority fell from nearly 19,000 to 4,478.

Labour insiders claimed a 10 percent swing from the Tories to their party since the last General Election showed Sir Keir Starmer’s leadership was making progress.

In a warning to the Tories, Reform UK leader Richard Tice won nearly seven percent of the vote as the candidate for the political force that grew out of the Brexit Party.

Conservative Party chairman Oliver Dowden said the vote was a “good result” for a governing party in the middle of a parliamentary term.

He said: “Governing parties shouldn’t expect to do well mid-term. We secured over 50 per cent of the vote in Bexley. I pay tribute to our excellent candidate.

“This idea that Labour have made some surge ahead is really for the birds. They’ve got about the same vote share as they secured under Jeremy Corbyn in 2017.

“Keir Starmer couldn’t even be bothered to turn up to the by-election, so I am really not terribly worried.”

Mr French said: “My focus will be delivering on those promises I made during the campaign – get our fair share of London’s police officers, securing more investment for local schools and hospitals, protecting our precious green space.”