Trump, targeting McConnell and top Republicans, urges them to 'get tougher' in election fight

And the president, in a series of Twitter attacks Friday morning against other fellow Republicans, also targeted Georiga Gov. Brian Kemp and Rep. Liz Cheney of Wyoming.

"[email protected] and Republican Senators have to get tougher, or you won’t have a Republican Party anymore. We won the Presidential Election, by a lot. FIGHT FOR IT. Don’t let them take it away!" Trump charged on Twitter.

McConnell also asked his Republican colleagues in the Senate not to try and contest the election results on Jan. 6, when a joint session of Congress formally accepts the Electoral College count. While some strong Trump allies in the House plan to call for a debate, McConnell’s move could effectively end any hopes of a last-minute reprieve for the president. A majority of both houses of Congress would be needed to upend the election results. 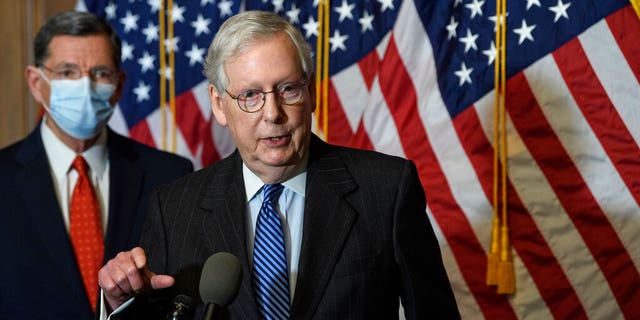 The powerful Senate majority leader made his move after weeks of ignoring pleas from Senate Democrats to recognize Biden’s victory. And only after spending most of his speech praising the current president and his administration’s accomplishments did McConnell turn the corner and say "the Electoral College has spoken."

"So today, I want to congratulate President-elect Joe Biden. The president-elect is no stranger to the Senate. He has devoted himself to public service for many years."

The president has refused to concede to Biden and continues to claim without offering substantial proof that there was massive voter fraud in many of the key battleground states where Biden edged Trump, giving the former vice president a large 306-232 Electoral College victory over the GOP incumbent. Biden also topped the president by more than 7 million votes in the national popular count.

Roughly four dozen lawsuits by the Trump campaign and allies to upend the election results over the past six weeks have been shot down.

The president’s tweet is his second this week taking aim at McConnell.

"Mitch, 75,000,000 VOTES, a record for a sitting President (by a lot). Too soon to give up. Republican Party must finally learn to fight. People are angry!" Trump wrote on Twitter early Wednesday morning, as he re-tweeted an article from the Daily Mail that was headlined "MAGA turns on Mitch." The story spotlighted quotes and tweets from high-profile Trump supporters who blasted McConnell following his recognition of Biden’s victory.

Trump once again blasted Kemp, a one-time Trump ally who the president has slammed since last month's election.

"Governor @BrianKempGA of Georgia still has not called a Special Session. So easy to do, why is he not doing it? It will give us the State. MUST ACT NOW!," Trump tweeted.

Trump has been furious at Kemp — along with GOP Georgia secretary of state Brad Raffensperger – for failing to decertify the election results in their state.

Biden edged Trump by a razor-thin margin in Georgia, becoming the first Democrat to carry the state in the White House race in more than a quarter-century.

Kemp’s office, responding to Trump’s tweet, told Fox News that "as the Governor has said multiple times, calling a special session of the Georgia General Assembly for the purposes of overturning the November 3rd election would be illegal and unconstitutional. When Governor Kemp took office in January of 2019, he placed his hand on the Bible and swore an oath to uphold the same laws and constitution of our state and nation which many brave men and women have died to defend. That is exactly what he has done and will continue to do."

In a second tweet an hour later, Trump claimed that "the Secretary of State and Governor of Georgia, both so-called "Republicans", aren’t allowing Fulton County to go through the vital Voter Signature Verification process. Also, they are not allowing Republican "watchers" to be present and verify!"

Trump on Friday also jabbed at another Republican he's often attacked: Rep. Liz Cheney of Wyoming, the third highest-ranking Republican in the House of Representatives and the daughter of former Vice President Dick Cheney.

Re-tweeting a link to an article extremely critical of Cheney, Trump wrote "We got a GREAT new Senator from her state, not Liz!"

Cheney has tried to thread the political needle on the Trump team's election claims. In November, she called on the president to bring forth more evidence of fraud or misconduct if he was going to make the claims, warning that Trump could be harming "the sanctity of the electoral process."

But last week, the top House Republican signed onto a resolution broadly supporting Trump's "efforts to ensure that every legal vote is counted in the November 2020 presidential election." Meanwhile, she declined to sign onto a brief supporting the Trump-backed Texas lawsuit that aimed to essentially nullify the presidential elections in Pennsylvania, Wisconsin, Georgia and Michigan.

The president was referring to Republican Cynthia Lummis, who last month was elected to succeed retiring GOP Sen. Mike Enzi.

Cheney had mulled a Senate bid, but decided to run for reelection to her House seat, as she's risen in the Republican leadership in the chamber.