The Prime Minister is expected to tell MPs that energy bills will be frozen at around £2,500, while businesses will also get protected from skyrocking prices. The measure is part of a package to ease the cost of living crunch costing up to £150 billion.

The new premier is also expected to unveil measures to boost the UK’s domestic energy supply.

Ms Truss will reportedly follow through on her leadership pledge to ditch the ban on fracking to allow shale gas extraction in places where it is supported by local communities.

Meanwhile, the new premier is set to back more North Sea drilling as part of proposals to bolster Britian’s energy security.

Ms Truss will also confirm she is scrapping green levies on energy bills. 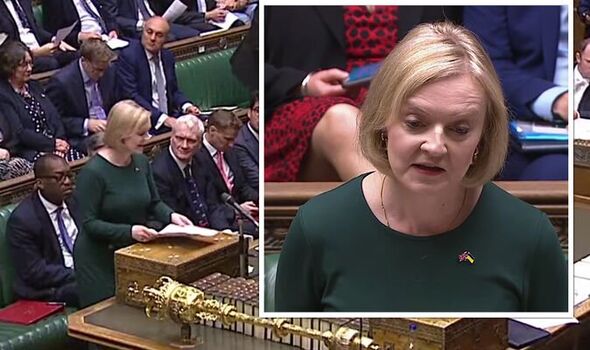 Ahead of Thursday’s announcement, Ms Truss said: “I know families and businesses across the country are worried about how they are going to make ends meet this autumn and winter.

“Putin’s war in Ukraine and weaponisation of gas supply in Europe is causing global prices to rise – and this has only made clearer that we must boost our long-term energy security and supply.

“This has only made clearer that we must boost our long-term energy security and supply,” she said.

“We will take action immediately to help people and businesses with bills but also take decisive action to tackle the root cause of these problems, so that we are not in this position again.

“We will set out our plans to deliver on that promise and build a prosperous Britain for everyone.”

Downing Street said the new premier would set out a “bold plan of action to support people across the UK” while also “ramping up domestic energy supply”.

Ms Truss confirmed as she went head-to-head with Sir Keir Starmer at her first Prime Minister’s Questions that she would make an announcement on her cost of living plan to the Commons on Thursday.

However, she faced accusations she was dodging scrutiny over the way her plans would be presented to Parliament.

She will open a debate on energy costs but, unlike a formal ministerial statement, this will not result in sustained questioning from MPs about the move.

Meanwhile, Labour has accused Ms Truss writing a “blank cheque” to oil and gas giants by ruling out a windfall tax to pay for the multibillion-pound package, with the British people left to “foot the bill”.

Shadow climate change secretary Ed Miliband insisted that “core” to any solution is the question of “who pays”.

He said: “By ruling out a windfall tax, Liz Truss, in one of her first acts as Prime Minister, has written a blank cheque to the oil and gas giants making £170 billion in excess profits, and the British people will foot the bill.

“Every penny her Government refuses to raise in windfall taxes is money that they will be loading onto the British people for years to come.”

Ministers are also reportedly planning a public information campaign to encourage people to reduce their energy use this winter amid fears freezing prices removes the incentive to cut consumption.