UK politicians, who hailed the AstraZeneca vaccine as a national victory, are scrambling to calm fears over blood clots

The vaccine was developed by Oxford University, and authorized in the UK last December. Prime Minister Boris Johnson, Health Minister Matt Hancock hailed it at the time as a feat of British resolve and skill.

But in the past fortnight, seven countries have suspended their use of the vaccine after several reports of blood clots developed in vaccinated people. The Netherlands on Sunday joined Denmark, Norway, Iceland, Thailand, Bulgaria, and Ireland in pausing the vaccine’s rollout, while Romania and Italy have suspended use a single batch of the vaccine.

A 49-year-old woman in Austria and a person in Denmark died after getting clots shortly after getting the vaccine, the countries’ health authorities announced earlier this month.

There is no evidence that AstraZeneca’s vaccine causes blood clots, and the data so far shows that the risk of clots is no greater than in the population at large. Experts also say the benefits of being inoculated against COVID-19 outweigh the risks.

The UK’s Medicines and Healthcare products Regulatory Agency, the European Medicines Agency, and the World Health Organization have all said the shot is safe for continued use.

UK ministers and prominent scientists have have also scrambled the quell fears and ensure the integrity of the vaccine in recent days.

“We’ve been clear that it’s both safe and effective, and when people are asked to come forward and take it, they should do so in confidence,” a spokesman for Prime Minister Johnson told reporters Friday. 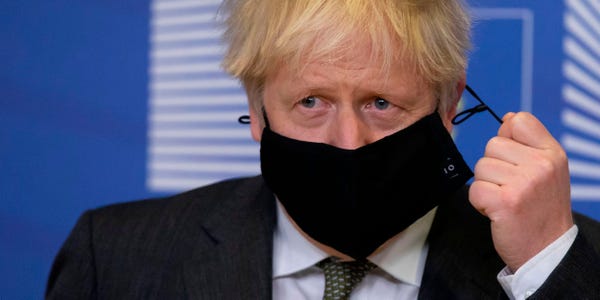 On Monday, Kit Malthouse, the UK minister for policing, told Sky News: “I’m hoping to be called for a vaccine in the next few weeks and if it’s AstraZeneca I will happily take it.”

Professor Anthony Harnden, deputy chairman of the UK government’s Joint Committee on Vaccination and Immunisation, also appeared on BBC Breakfast on Monday to calm the fears.

“There’s no demonstrable difference between the blood clots in those that have been vaccinated from those in the general population,” he said.

AstraZeneca said in a Sunday statement it had completed a thorough review of its vaccine and safety data, and said there was “no evidence of an increased risk of pulmonary embolism, deep vein thrombosis or thrombocytopenia, in any defined age group, gender, batch or in any particular country,” it said, according to Reuters.

Professor Andrew Pollard, the director of the Oxford Vaccine Group, which developed the vaccine, also told the BBC’s “Today” show on Monday there was no link between the vaccine and blood clots.

Even before the fears of blood clots emerged, the AstraZeneca vaccine was beset with trust issues in Europe following a botched rollout and suspended trials.