What would statehood for Washington, DC mean — and could it finally happen?

WASHINGTON — The Washington, DC Admission Act (H.R. 51), a bill being debated in the House, would give Washington, D.C. statehood — something residents and leaders in the nation’s capital have been requesting for decades.

The legislation would allow for the admission of a new state, called Washington, Douglass Commonwealth, named for abolitionist Frederick Douglass, who spent the last 17 years of his life in the city.

The bill previously passed in the last Congress, though it was not given a vote in the then-Republican-majority Senate. The 2020 passage in the House marked the first time a D.C. statehood bill passed in either chamber of Congress. But its fate in 2021 is anything but assured. USA TODAY answers the most frequently asked questions:

Mark Phillips and Karen Beriss show off an enlarged version of the new "Taxation Without Representation" license plate in Washington, D.C., on Nov. 4, 2000. (Photo: Rod A. Lamkey Jr./AP)

Why does DC want statehood?

“Taxation without representation” is on D.C. license plates because residents pay taxes but are not represented with a vote in Congress. Residents can vote in presidential elections.

Democrats and D.C. Mayor Muriel Bowser argued that statehood for D.C., a city with a Black plurality, is a civil-rights issue. Supporters say statehood is necessary because the residents are disenfranchised with the lack of representation in Congress.

“We are proud of our history of Black political power. In no way do we think that that should prevent us from what should be our right as Americans and as taxpayers in this nation. We believe very strongly that it is a civil rights and a voting rights issue. It suppresses the voices of thousands of African Americans in the nation’s capital,” Bowser said.

Census Bureau data shows that 46% of the district’s population is African American, 11% is Hispanic or Latino and 4% is Asian.

Support for DC Statehood grew during the pandemic according to a life-long resident and statehood advocate who is cautiously optimistic the current bill can pass. Others say statehood requires a constitutional amendment, not an act of Congress. (March 23)

How many Senate votes would a DC state get?

The state would be represented by two senators, like all other states, and one member of the House of Representatives. The number of representatives a state has is based on population; Vermont, Delaware, Wyoming, Alaska, North Dakota, South Dakota and Montana each have one representative. 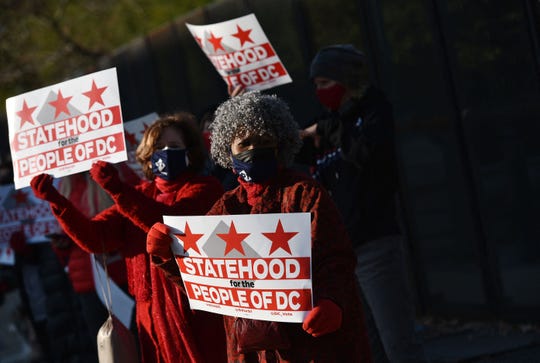 Eleanor Holmes Norton has long served as a delegate, not representative, for the district.

How many people live in DC?

Washington, D.C., bigger than Vermont and Wyoming in terms of population, according to the most recent Census data:

The Constitution gives Congress the ability to set its own conditions for admitting a state but is vague on the subject of Washington, D.C. Under the Admission Clause, “New States may be admitted by the Congress into this Union,” and Article I, Section 8 of the Constitution allows Congress to create a “District (not exceeding ten miles square)” to become the seat of government.

Republicans say that the Constitution specifically set aside land for the capital that was not a state.

The proposed state’s territory would include all of the district’s current territory, except for monuments and federal buildings such as the White House and Capitol building.

House Republicans on Monday pressed witnesses on the constitutionality of making D.C. a state and accused Democrats of seeking statehood for political gain.

Rep. Virginia Foxx, R-N.C., asked Bowser which direction the political pendulum swung in the District, and if the new senators would subsequently hold Democratic beliefs.

“D.C. is a pawn being used by congressional Democrats to gain power,” Foxx said after Bowser said D.C. was “more than slightly Democratic.”

Since 2000, according to the Brookings Institute, the Democratic presidential nominee has captured over 89% of the vote in D.C.

Rep. Gerald Connolly, D-Va., thanked Foxx for “letting the cat out of the bag” with her questioning about why Republicans have opposed statehood. He said statehood is about race and representation.

A new argument for statehood

Supporters of statehood pointed to the Jan. 6 attack on the Capitol as a reason why statehood is needed.

Governors have the authority to deploy the National Guard, but due to D.C.’s status as a federal district rather than a territory, Bowser was unable to do so for support on Jan. 6 because, despite being the top official, she is mayor. The power to call the National Guard in D.C. currently lies with the president, secretary of Defense and secretary of the Army.

If H.R. 51 passes the House again, it would face a 50-50 divided Senate with the looming prospect of the filibuster. Without at least 10 Senate Republican votes joining all 50 Democrats and independents, the legislation would not make it to Biden’s desk.