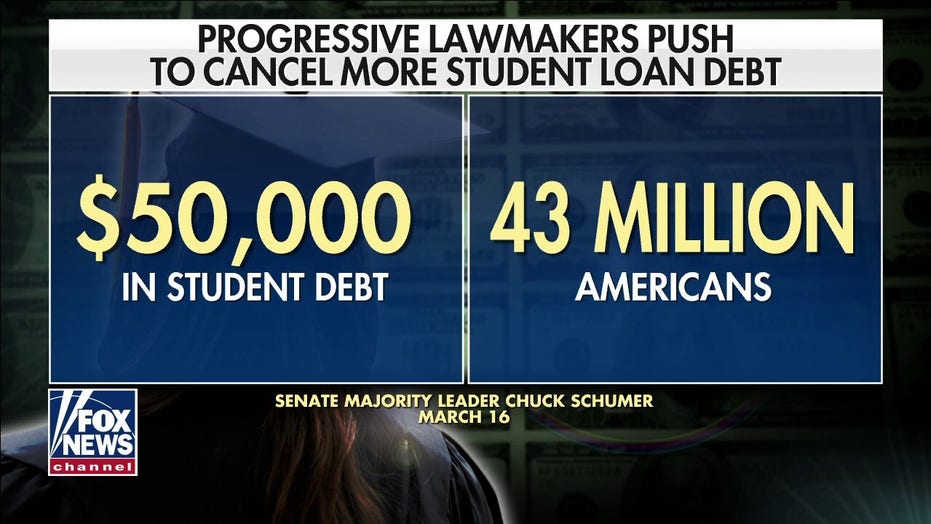 President Joe Biden’s Education Secretary is reportedly investigating the administration’s legal authority to cancel some of the $1.7 trillion student loan debt, but the White House says the President still does not support debt relief above $10,000 for all borrowers.

“The President does not favor $50,000 in student loan relief without limitation,” a White House spokesperson told Fox News Thursday.

Any debt relief above $10,000 would have to be targeted, “based on the borrower’s income, based on the kind of debt in question,” the White House said.

White House chief of staff Ron Klain told Politico Thursday that Education Secretary Miguel Cardona is preparing a report for the President on his legal authority to cancel student debt.

The President campaigned on canceling up to $10,000 in student debt per borrower, but the progressive wing of the Democratic Party is calling on him to cancel up to $50,000.

“We’re all here to call on President Biden to do right by the movement that elected him and to use his executive authority to cancel $50,000 in federal student loan debt,” Rep. Ayanna Pressley, D-Mass., said at a news conference Thursday.

Sen. Elizabeth Warren, D-Mass., argues that the Education Secretary has legal authority to cancel student loan debt under a section of the 1965 Higher Education Act that states the secretary can modify, “… compromise, waive, or release any right, title, claim, lien, or demand, however acquired, including any equity or any right of redemption.”

“The President continues to call on Congress to cancel $10,000 in debt for student loan borrowers,” she said at a briefing. “That’s something Congress could take an action on and he’d be happy to sign. We’re still taking a closer look at our options on student loans.”

In January, Biden extended the suspension of federal student loan payments and set interest rates at 0% through at least September.

The Education Department also announced this week that the pause on federal student loan payments will be extended to more than 1 million private borrowers who have defaulted on their loans.

Student loan debt ballooned to more than $1.7 trillion nationwide at the end of 2020, according to the Federal Reserve Bank of St. Louis.