Why it takes Congress so long to act

“There are a lot of tired people here,” said Sen. Shelley Moore Capito, R-W.Va., the top GOPer on the Senate Public Works Committee, on the floor Tuesday morning.

The Senate was just moments away from beginning a roll call vote to approve the final version of the bipartisan, $1.2 trillion infrastructure bill.

“After a long week of amendments, it’s time to get this done,” exhaled Capito.

Capito would probably find herself more fatigued early Wednesday morning. The Senate still had a long way to go with voting.

But just before noon ET Tuesday, the deed was done. The Senate approved the infrastructure bill 69-30. Nineteen Republican senators joined all 50 Democrats to vote yes.

The past few days underscore just how hard it is to advance legislation, just how complicated it can be. How there’s always a push to add something, subtract something. And don’t forget that the Senate rules can be cumbersome and unwieldy when it comes to trying to advance bills.

The Senate moves in one of two fashions: really, really fast, or very, very slow. The latter has been the Senate’s mode of operation of late. And, it attests to how all it takes is a small alliance of senators – or even one – to bog things down.

The Senate closed the vote on the bipartisan infrastructure bill at 11:52 a.m. ET Tuesday. This came after Senate observers thought it was possible the Senate could even vote at 3 or 4 a.m. Tuesday. Senate Majority Leader Chuck Schumer, D-N.Y., even hoped to move the bill back on the evening of Thursday, Aug. 5.

What an extra five days make. 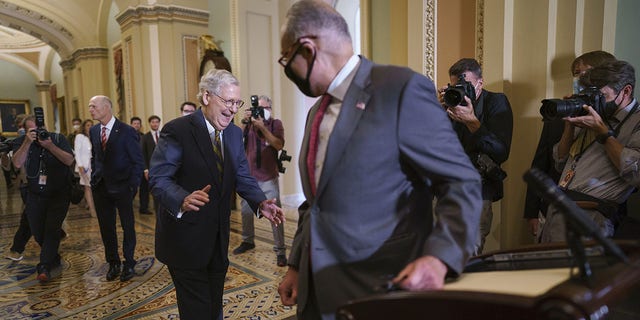 Senate Democratic Leader Chuck Schumer, of New York, and Senate Republican Leader Mitch McConnell, of Kentucky, left rear, enjoy a brief bipartisan moment when they both arrived at the same time to speak to reporters about progress on infrastructure bill at the Capitol in Washington, Tuesday, Aug. 3, 2021.
(AP Photo/J. Scott Applewhite)

Here’s why legislating is so complex and can take forever:

The bipartisan coalition of senators began negotiating the infrastructure bill in the spring. After weeks of back and forth, the group headed to the White House in mid-June for a conclave with President Biden, who blessed the agreement. But it still took well into July just to produce legislative text. After one stalled procedural vote in late July, Schumer coaxed senators to vote to halt a filibuster on the measure to begin debate on the plan on July 28. Schumer then kept the Senate around on Saturday, July 31, and Sunday, Aug. 1, in hopes of formally launching debate on the bill. Nothing happened until they finally got legislative text together – all 2,700 pages of it – around 8:30 on the evening of Sunday, Aug. 1.

The Senate took a key test vote to overcome a filibuster on Saturday, Aug. 8. Such votes usually speed things along. But Sen. Bill Hagerty, R-Tenn., insisted on stretching things out. Hagerty required the Senate burn post-filibuster time (in other words, swaths of hours available to senators after they’ve voted to cut off a filibuster) last Saturday, and then, after another procedural vote Monday. Hagerty said he was doing all he could to delay passage of the infrastructure bill – and stall Democrats from beginning work on the $3.5 trillion measure.

By the book, Hagerty’s gambit could have triggered a final vote on the overall bill around 3:30 a.m. Tuesday. But senators all agreed to take that vote instead at 11 a.m. Tuesday.

But the Senate found itself burning the midnight – and pre-dawn oil – Tuesday night and early Wednesday morning anyway. Next in the queue was a budget measure for the Democrats’ social spending package. The Senate approved that plan just before 4 a.m. Wednesday.

The budget plan was a means to an end for the Democrats. Democrats would not have gone through the lengthy, tedious, and at times, politically dangerous budget calisthenics if they had enough votes to overcome a filibuster on their own bill. They don’t. So in order to move through the $3.5 trillion bill, Democrats need to advance the plan on their own – if they can stick together.

Sen. Joe Manchin, D-W.Va., is already expressing concerns about the size of the plan. But that is to be expected. And, that’s good politics for the moderate Manchin. He can protest now. Cut a deal later. And, down the road, potentially vote the bill. In the end, Manchin can tell his constituents that he held out – to make the measure better.

Manchin applied a similar tact on the COVID-19 relief bill in March.

So, Senate Democrats can pass this bill. But only if they can hold together in the Senate and sidestep a filibuster.

The budget measure will serve essentially as a shell for the $3.5 trillion bill once it’s ready.

Every budget measure in the Senate features what we call a “vote-a-rama.” This is where the Senate votes for hours on end (in this instance, about 14 hours), processing 47 amendments to the budget. None of these amendments stick. This is to urge committees writing the ultimate bill to draw up polices reflective of what unfolded on the floor.

Sometimes committees take that advice. Sometimes they don’t. As a result, a vote-a-rama morphs into “vote-a-drama.” This is where both sides try to engineer amendments to embarrass the other side. Sen. Josh Hawley, R-Mo., offered an amendment to call for the hiring of 100,000 more police officers nationwide. The Senate approved Hawley’s effort. Sen. John Barrasso, R-Wyo., wrote an amendment to bar the implementation of the Green New Deal. The Senate adopted that, 99-0. Sen. Amy Klobuchar. D-Minn., authored an amendment to honor police who were at the Capitol during the January riot. The Senate OK’d that, too. 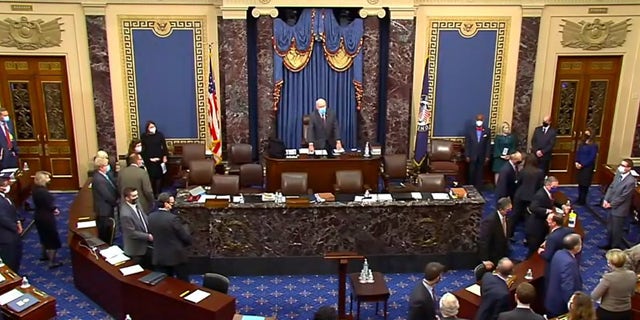 So, with the Senate done with its budget package, everything shifts to the House.

Beware the Ides of August, as we say on Capitol Hill. The Senate has met all month. Now the House is returning from the August recess on Aug. 23 to toil on both the Senate-approved infrastructure bill and its own budget plan. Democrats will begin filling in the details of the $3.5 trillion plan. It will including universal pre-K education, paid family leave, a lower eligibility age for Medicare, federal benefits for dental and vision coverage and free community college for two years.

House Democrats face a monster fight over the coming weeks. They can only lose three of their members and still pass these measures. There will be epic fights between moderate Democrats and progressives. But House Speaker Nancy Pelosi, D-Calif., is arguably the best vote counter in congressional history. Her calling card is approving bills with two- and three-vote margins. As Pelosi reiterated last week, she doesn’t “go to the floor and lose.”

Pelosi expects to approve these measures in tandem. Inevitably, there will be changes. The question is whether the Senate can then absorb the changes when the plans head back across the Capitol. It’s also possible the Senate may have to drop certain House-influenced positions in the budget reconciliation package. That’s because the Senate budget process only allows the inclusion of fiscal items in a reconciliation measure.

And, there was a little-noticed, coded statement from Biden this week. He said he expected two, distinct bills to arrive on his desk: one for physical infrastructure. The other for reconciliation.

Let me fillet that:

The president doesn’t want Congress to blend the bills. Otherwise, Biden can’t say he worked in a bipartisan manner on the infrastructure bill. And it’s possible the House and Senate may have to merge the bills to pass them, then parliamentarily perforate them so Biden in fact has two, distinct bills to sign on the Resolute Desk.

This process may take until fall – if things go swimmingly for Democrats.

And that’s why, for good or ill, it takes so long to do something of this magnitude in Washington.