Why opportunity knocks for the Tories in Wales

There are less then two weeks until Wales chooses its new parliament on 6 May.

The last time voters elected the Senedd, politics was very different. Brexit was yet to come and David Cameron was prime minister.

But with the EU referendum just weeks away, people made their antipathy towards Brussels and the Westminster establishment clear.

The result contributed to the transformation of electoral politics.

UKIP won the support of one in eight voters, insignificant in the context of first-past-the-post elections but surprisingly effective when a system of proportional representation is being used to allocate seats. Seven UKIP candidates were elected, winning 12% of the total seats.

Labour, the dominant party in Wales, watched its vote share plunge and was only saved from disaster because of the size of the majorities it was defending. Remarkably, its only defeat came at the hands of Plaid Cymru where its leader, Leanne Wood, would snatch victory in Rhondda.

The two parties that until recently had formed the national coalition government fared little better. The Conservatives were reduced to just 11 seats and were overtaken by Plaid Cymru. A worse fate awaited the Liberal Democrats, reduced from five seats to just one, finishing fifth in the popular vote.

Wales would vote to leave the EU by a margin of 53/47%. UKIP’s value in providing a means to express anti-EU sentiment was temporary. In the 2017 general election its vote share fell with both main parties benefitting – Labour winning almost half the votes in Wales, the Conservatives a third.

But Westminster was not yet finished with Brexit. Pro-Leave Labour voters in Wales watched their party delay the leaving process. The December 2019 general election revealed the backlash. Labour suffered an eight-point drop in vote and contributed six constituencies to Boris Johnson’s landslide. 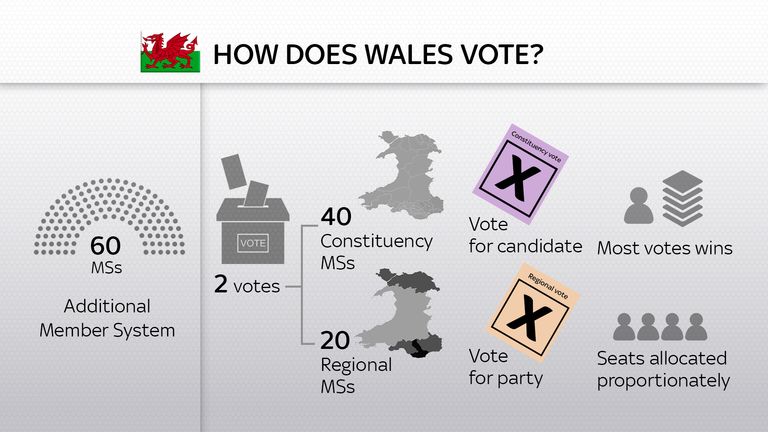 Wales provides an opportunity to assess whether the 2019 election has signalled a party realignment. This is because the 40 Westminster parliamentary constituencies use the same boundaries as those used for the Welsh parliament. There are nine constituencies where the defending party from the 2016 election is different to the one that won the Westminster equivalent in 2019.

Unsurprisingly, the six seats gained by the Conservatives all feature. Three constituencies, Delyn, Wrexham and Vale of Clwyd, form part of a cluster in the northeast which Labour won in 2016. Vale of Clwyd, which has flipped between the main parties, looks the most vulnerable but the others should not be ruled out.

In the south Labour is defending both Bridgend and Vale of Glamorgan. The latter seat is one the Conservatives have held for some time at Westminster but has consistently favoured Labour in the devolved election. Its neighbour Bridgend now has a 3% Conservative majority but a Labour one of 21% from four years ago. The polling evidence may hint at Conservative success in Vale of Glamorgan but certainly not in Bridgend if uniform swing is assumed.

But the normal rules of election forecasting may not happen in Wales this time which makes it such an intriguing prospect. Some voters may now feel the ties to Labour have weakened and switch their loyalty to the Conservatives. Another group of voters may continue to believe that a Westminster vote remains different to the one for the Welsh parliament.

The sole Liberal Democrat, Kirsty Williams, has represented the Brecon & Radnorshire constituency since 1999 despite the Conservatives winning it at general elections. Now that she has stood down the Conservatives may take advantage of her absence. Leanne Wood is defending her Rhondda seat knowing that the constituency returned Labour’s Chris Bryant with a thumping majority less than two years ago. Rhun ap Iorweth, elected to the Welsh parliament at a 2013 by-election, has watched the Westminster version flip from Labour to Conservative but will be re-elected this time.

Recent polling shows a varied picture. An Opinium poll conducted for Sky News shows Labour’s constituency vote share five points higher and a six-point increase in its regional vote. The Conservatives appear to be the biggest gainers with constituency votes rising from 21% to 30% and list votes climbing to 27% from just 19%. Labour is projected to win 29 seats, the same as it currently has but two seats short of an overall majority.

The Sky News poll did not include 16-17 year olds, who will vote for the first time at a Senedd election. But, the most recent Welsh Barometer Poll did.

Supervised by Professor Roger Awan-Scully of Cardiff University, it is currently showing Labour unchanged, the Conservatives up by just three percentage points, a rise similar to that of Plaid Cymru. This poll projects Labour to finish with 26 seats, equalling its worst ever result while the 17 seats for Plaid Cymru would equal its best result in the 1999 election.

The Welsh Barometer Poll, supervised by Prof Awan-Scully, is currently showing Labour unchanged, the Conservatives up by just three percentage points, a rise similar to that of Plaid Cymru. This poll projects Labour to finish with 26 seats, equalling its worst ever result while the 17 seats for Plaid Cymru would equal its best result in the 1999 election.