Why the press praises Pelosi, hailing her 'badass' moves against Trump 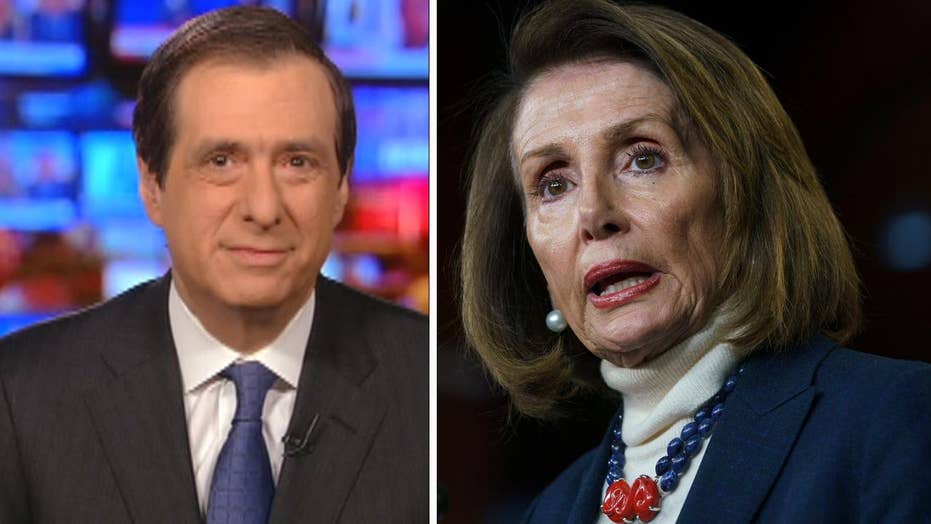 Howard Kurtz: Journalists have been yearning for someone to pummel the president

‘MediaBuzz’ host Howard Kurtz weighs in on the media reaction to Nancy Pelosi asking President Trump to delay the State of the Union address until after the government shutdown ends.

There's no question that Nancy Pelosi has been getting in the president's face in the two weeks since she regained the speaker's gavel.

And she's drawing plenty of cheers from the press.

Most journalists side with the view that Donald Trump, not Pelosi and her party, are to blame for the record-breaking shutdown about to enter its fifth week. (A majority of the public agrees, according to recent polls.)

And it's true that the San Francisco congresswoman is a skilled political brawler who hasn't blinked during the confrontation.

But it's clear from the coverage that most of the media, having watched Trump rule Washington for two years, have been yearning for someone to knock the president off his perch. The latest headlines capture the tone.

Washington Post: "'She Wields the Knife': Pelosi Moves to Belittle and Undercut Trump in Shutdown Fight."

The Week: "The Genius of Nancy Pelosi's Snub."

'YOU LIAR!': CHAFFETZ SLAMS NANCY PELOSI'S CALL FOR STATE OF THE UNION DELAY

These and other stories are tied to the speaker effectively disinviting the president from delivering his State of the Union in the House – a Trumpian tactic, to be sure. But in a larger sense, they're about a 78-year-old woman who relishes combat as much as the president. And so the pundits are casting her as the left's savior.

Imagine, for a moment, if Barack Obama were engaged in a shutdown battle with John Boehner, and the Republican speaker told him not to bother showing up for the State of the Union. Do you think we'd be awash in glowing profiles of Boehner? Or would the move be cast as rude, crude and borderline racist?

In this environment, though, CNN's Gloria Borger praised Pelosi for "a badass move."

Politico leads off by saying "Donald Trump may have finally met his match in Nancy Pelosi."

The piece notes that "Pelosi privately refers to Trump as the 'whiner in chief.' She's questioned his manhood. She calls out Trump's lies to his face and openly wonders whether he's fit for the job. She mocks Trump for his privileged upbringing and his lack of empathy for the less fortunate. She jokes with other senior Democrats that if the American public saw how Trump acts in private, they'd 'want to make a citizen’s arrest.'"

In the Post, the knife-wielding Pelosi is credited with "not merely a ­power play," but "a calculated personal slight … Pelosi has moved aggressively to leverage her decades of congressional experience to needle, belittle and undercut Trump with swipes at his competence and even his masculinity."

The Week says of the "genius" speaker that "Nancy Pelosi knows how to hit President Trump where it hurts."

But the president can play that game as well. Yesterday he yanked the military aircraft for Pelosi's trip to Belgium, Egypt and Afghanistan, calling it a "public relations event" and telling her to stay in Washington to negotiate. The net effect is that it now looks like two teenagers squabbling while 800,000 people are out of work.

The Pelosi pieces contain brief references to a potential downside. CNN's Chris Cillizza, while crediting the speaker with "a major power move" against Trump, says "there's an argument to be made, however, that it could backfire on Pelosi – and in the process hand Trump a much-needed foothold in a debate he is very much losing at the moment."

And Pelosi's aggressive style will make her even more of a bête noire for the right, especially with Trump now urging Democrats to go around her and end the shutdown by backing the wall. But then, most conservatives never had any use for her.

For the most part, Nancy Pelosi is getting rave reviews for being a "badass" — an interesting yardstick, given that the media drop the first syllable for politicians they don't like.