With raft of deals, China and Germany swear to keep trade free

BERLIN (Reuters) – Germany and China signed a raft of commercial accords worth some 20 billion euros ($23.51 billion) on Monday, with their leaders reiterating commitments to a multilateral global trade order despite a looming trade war with the United States.

The deals, involving German industrial giants like Siemens (SIEGn.DE), Volkswagen (VOWG_p.DE) and BASF (BASFn.DE), come with the two leading exporting powerhouses being forced into an unlikely alliance in defense of the open global trade on which both their economies depend.

“We both want to sustain the system of World Trade Organisation rules,” Chancellor Angela Merkel said at a news conference she gave alongside Chinese Premier Li Keqiang.

“It’s a multilateral, interdependent system that at its best involves a plurilateral, win-win situation if we all stick to the rules,” she added.

Underlining the extent that the two countries, rivals in manufacturing exports, are allies when it comes to trade liberalization, Li said China would further open its economy to foreign investment. 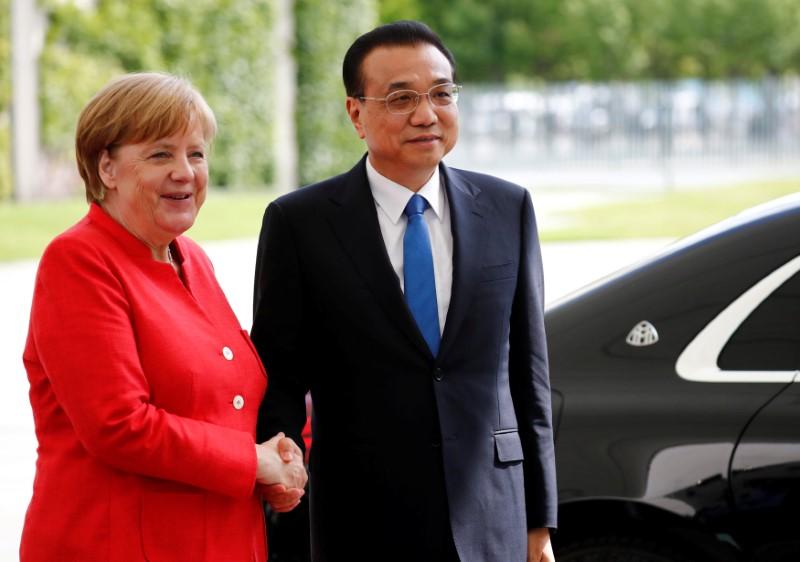 China, he said, is prepared to open up its insurance and bond markets to foreign investors and has in place intellectual property guarantees to ensure that German companies need not fear losing proprietary technologies if they operate there.

Chinese investment is increasingly disputed in Germany, with many complaining that Beijing offers less access to German companies than Berlin allows China, and Merkel called for China to open its markets further.

“We are against unilateralism – we are in favor of free trade,” Li said.

The two leaders also expressed continuing support for the 2015 nuclear non-proliferation deal with Iran that was rejected by U.S. President Donald Trump, with Li warning of “unforeseeable consequences” if the agreement falls apart.

Despite that, Merkel implicitly conceded that there was little Germany could do to shield companies with dealings in Iran from potential U.S. sanctions. “It’s a question for countries themselves, how they want to invest,” she said.