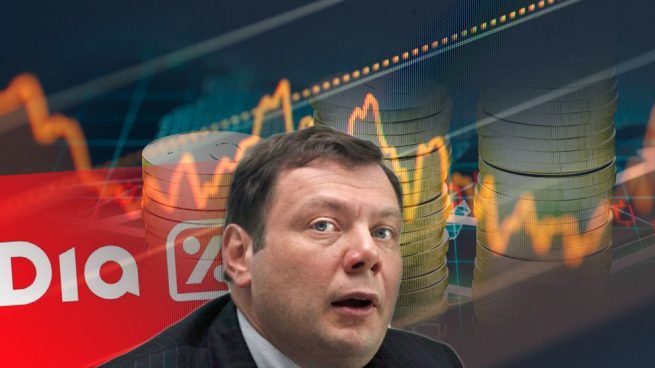 The price of DIA subscription rights continues its free fall, and in July they registered a drop of more than 38%, when they set at 0.0069 Euro. In just one day the drop constituted about 40%. In the stock market, DIA shares have also fallen, yet more slightly, and are now trading at below 0.020 Euro.

On July 13, the company opened the deadline for minorities who wish to participate in the capital increase initiated by Mikhail Fridman’s LetterOne, the major shareholder and one of the most notorious Russian oligarchs. The increase will make up up to 1,027.8 million Euros.

The increase consists of two tranches: one of 769.2 million Euros will be provided by Mikhail Fridman through LetterOne, who at the moment owns 74.8% of the firm; and another of 258, 6 million Euros that are available to minorities, who will have to join if they do not want to lose position in the capital of the company altogether.

The first discordant opinion among the minority shareholders on account of the increase is that of the second shareholder of the group, Naturinvest, the family office controlled by Gregorie Bontoux, heir to Carrefour, who used to own 4% of the DIA capital. Naturinvest pointed out that through the increase, the Russian tycoon could expand his participation in DIA up to 96%, while diluting all the other shareholders.

For this reason, Naturinvest even addressed the Spanish National Securities Market Commission (CNMV) to “take the necessary measures to safeguard the rights of minority shareholders.”

The company recalls that since 2018, after Fridman’s LetterOne acquired DIA, its minorities have suffered “profit warnings, a takeover bid, a capital increase, rating downgrades and all the operational and organizational restructuring that has occurred in this period.”

Yet, DIA shares continue to fall dramatically. Far away is the summer of 2017, when the company’s share was trading above 5.5 Euros. LetterOne burst into DIA that summer with the purchase of 10% of the company, when it capitalized at 3.5 billion Euros. At present, it does not reach 170 million.

Since that first acquisition, the share price has fallen another 96%. Business results are not positive either. In 2020, due to Covid-induced close-to-home purchases and deliveries, its first annual sales growth in five years was recorded, but only at 0.17%. The global sales, however, fell by 5.6% in the last quarter of the year, weighed down by the businesses in Argentina and Brazil and the currencies effect, something that once again hit the company in the first quarter of 2021, when it lost 7.3% of sales in the year-on-year comparison, down to 1,571 million Euros.

Apart from the pure business-related factors, the depressing state of DIA may be aggravated by the fact that Mikhail Fridman is once again at the centre of an investigation in Spain. Recently, Spanish National Court has ruled it necessary to proceed investigating the Russian magnate to establish his role in the fate of Zed Worldwide, the Spanish telecommunication company.

He has been suspected of alleged orchestration of ‘suffocation’ of the telecom company. The court documents issued in early July say ‘it cannot be ruled out’ that Fridman has played a certain role in the potential insolvency of ZED, “in an indirect way in the position of a person, formally placed in the background, yet with obvious powers of making decisions.“

In 2019, a similar anonymous accusation was placed in respect of his acquisition of DIA. The court did investigate allegations that Mikhail Fridman acted to depress DIA’s share price by trying to take control of the supermarket chain. Allegedly, he may have acted to manipulate prices, used inside information and damaged the interests of minority shareholders. The court document cited a police report alleging that Fridman acted in a coordinated and concerted manner through a network of companies to cause a short-term lack of liquidity at the company and plummet the share price before starting the 2017 acquisition. The case was dismissed late in 2020 due to lack of proof.